When Patrice Gamble’s seven-month-old son developed a runny nose, cough, and 102°F fever, she thought it was a cold. She brought him to an urgent care center where she was told “nothing was wrong” and that maybe, as a new mom, she was taking his temperature wrong. But when his symptoms worsened and his cough began to sound like he was choking on his tongue, she knew it was not “nothing” and brought him to an emergency room.

“I felt terrible, helpless, and afraid. That’s the only way to describe it. The cough alone was enough to break my heart. I could tell he was in pain by the way he’d whimper afterward,” says Gamble. “It’s not something I ever want to experience again.”

At the hospital, Gamble’s son was diagnosed with respiratory syncytial virus (RSV), and they recommended she have her son sleep on a slight incline to help with breathing. They also advised she frequently suction his nose and keep it lubricated with saline spray and “treat it as I would a ‘typical’ cold,” she said. 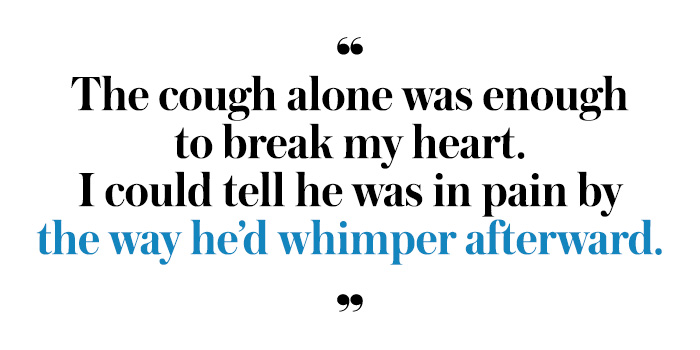 RSV is a lower respiratory-tract virus that nearly every child is exposed to it by age two. In adults and older children, it can look like a common cold, but it can be life-threatening, particularly for infants. Over 33 million children under age five get RSV each year; three million of them are hospitalized and about 120,000 die from complications of it. Infants under six months make up half of these hospitalizations and deaths.

Fortunately, Gamble’s son recovered after six weeks, but during that time, they took numerous trips to the pediatrician. Again and again, she was told all they could do was make him comfortable and provide supportive care. Though there is no specific treatment for RSV, scientists at Pfizer are hard at work trying to prevent the disease through research they are conducting to develop a vaccine that, if proven effective, could immunize the pregnant mother with the goal of increasing antibody levels in the mother. These antibodies may then get transferred from the mother to the baby during the remainder of her pregnancy. Once the baby is born, if the baby has received those mother-derived antibodies, the baby may be able to ward off RSV. If Pfizer is successful in clinical studies and receives approval from regulatory bodies, such a vaccine would likely be the first of this kind to be licensed.

To see the potential of maternal immunizations, it’s essential to understand a natural process that occurs during the second and third trimester of pregnancy called maternal immunity. This is when a mother can pass disease-fighting antibodies known as immunoglobulin G (IgG) to the baby in the womb.

These antibodies are capable of helping newborns fight off pathogens during the first few months of life — a period known as the “window of vulnerability” — before they are old enough to efficiently make their own or be immunized.

A pregnant mother is able to pass on many different disease-fighting antibodies, but the levels of antibodies circulating varies from person to person. It’s a good system, but a mom may not have the right level of circulating antibody against RSV while she is pregnant, and infant mortality rates continue to be high. Every year, over 57,000 hospitalizations, 500,000 emergency department visits and 1.5 million outpatient clinic visits among children under five years of age are attributed to RSV in the U.S.

The goal is to boost maternal immunity with vaccines designed specifically to be used during pregnancy, to help mothers pass more antibodies to their babies. For each maternal vaccine being studied, the goal is to demonstrate that increasing the antibody level against a given disease through maternal immunization increases the potential for disease protection.

“Immunizing the mother in the last trimester, when the system of maternal antibody transfer is most active, has been shown to provide protection to the baby for influenza and tetanus,” Kathrin Jansen, PhD, senior vice president and head of vaccine research and development at Pfizer, tells SheKnows. “We have designed our vaccine in a way that we hope will maximize the virus-neutralizing antibody response in the mother and enable the mother to pass those antibodies on to her baby.”

Jansen says that the vaccines currently approved for use in pregnant woman have demonstrated to be safe and effective. For example, starting in the late ‘80s, there was an initiative launched by the World Health Organization to give pregnant women the tetanus vaccine, and since then, there’s been a 96 percent decrease in neonatal tetanus deaths.

“None of those vaccines were ever licensed [for maternal immunization], but interestingly, the large body of data that emerged over the years was analyzed by a committee at the World Health Organization to investigate the safety of maternal immunization,” says Jansen. “The committee concluded there is no evidence of adverse pregnancy outcomes from the vaccination of pregnant women with the inactivated viral, bacterial or toxoid vaccines it has investigated.”

The Next Frontier in Maternal Medicine

Pfizer hopes to wrap up the phase two study for the RSV vaccine candidate later this year, and, if the data supports further investigations, plans to begin the third and final phase soon after. Pfizer is also currently studying a vaccine against Group B streptococcus disease (for maternal immunization as well), which is also in phase two studies. If these and future studies are successful, Pfizer plans to work with regulators in the U.S. and around the world to license the new vaccines in the next few years and bring them to patients. FDA approval would likely make Pfizer’s RSV vaccine candidate the first RSV vaccine licensed specifically for use during pregnancy to protect infants, which would be a historic achievement that Jansen and everyone at Pfizer believe could usher in a new era in public health.

Global access to maternal vaccinations has the potential to further lower infant mortality rates. “Routine infant immunization has made a dent in the disease burden but there are still approximately 15,000 children dying from infectious diseases each day globally,” says Jansen. “Part of the reason is that we have not been able to address infectious diseases efficiently in the very, very young.”

It’s an unmet need that maternal immunization is being studied for, and Pfizer is committed to bringing new vaccines to those who need protection. “We have an opportunity to look at the many other infectious diseases that affect the very young; the diseases that strike shortly after birth,” says Jansen. “Further progress with maternal immunization could have a significant impact in protecting the most vulnerable in our society.”

This post was created by SheKnows and sponsored by Pfizer.