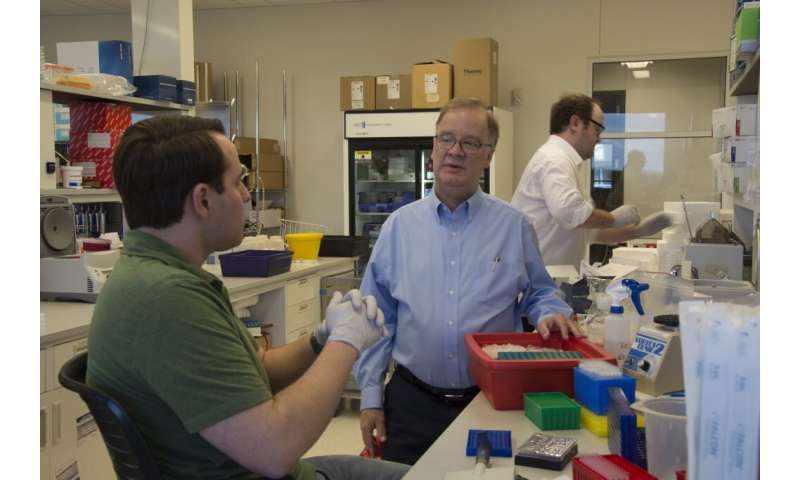 Scientists at the HudsonAlpha Institute for Biotechnology, the University of California, San Francisco (UCSF), and the University of Alabama at Birmingham (UAB), have identified a new risk factor for multiple neurodegenerative diseases.

“Finding evidence for a risk factor that contributes to multiple neurodegenerative diseases is exciting,” said Richard M. Myers, Ph.D., HudsonAlpha president and science director. “We already know that these diseases share some pathologies. This work shows that the underlying causes of those pathologies may also be shared.”

In the study, which was published April 23 in the American Journal of Human Genetics, researchers sequenced and analyzed whole genomes of more than 1,100 people. They found that rare variation in the gene TET2 nearly doubled the risk of developing diseases like Alzheimer disease (AD), amyotrophic lateral sclerosis (ALS), and frontotemporal dementia (FTD).

“The project wouldn’t have been possible without extensive collaboration between institutions,” said first author Nicholas Cochran, Ph.D., a senior scientist in the Myers Lab. “You end up being able to find things that you can’t find working alone.”

Jennifer Yokoyama, Ph.D., an assistant professor of neurology at UCSF, worked with Cochran on technical details and also was the point person for sample collection. The majority of the samples used for the project were collected over decades at the UCSF Memory and Aging Center and then sequenced and analyzed at HudsonAlpha.

Once the research team had the sequence results, they analyzed the genomes of 493 people with either AD, ALS, or FTD and 671 healthy people. Many of the patients had early-onset versions of neurodegenerative disease, which suggests that it is more likely that there would be a genetic component of their illness. During genome analysis, the researchers looked at both coding and non-coding regions of the genome for DNA sequence variants, a strategy that allowed them to be more confident that any possible genes they pulled out were the real deal.

“We didn’t go in with any suspicions about what we might [get], so we’re excited that we did find a new genetic association here,” Cochran said. TET2 is especially exciting because it encodes a protein that catalyzes DNA demethylation. Previous work has shown that changes in DNA methylation happen during aging, so the authors hypothesize that mutations in the gene could lead to a faulty TET2 protein that disrupts how the brain ages and contributes to the development of neurodegenerative diseases.

“Sometimes we get a hit, and it’s hard to understand what it might be doing, but TET2 already has established roles in the brain. So this finding really made sense,” Cochran explained.