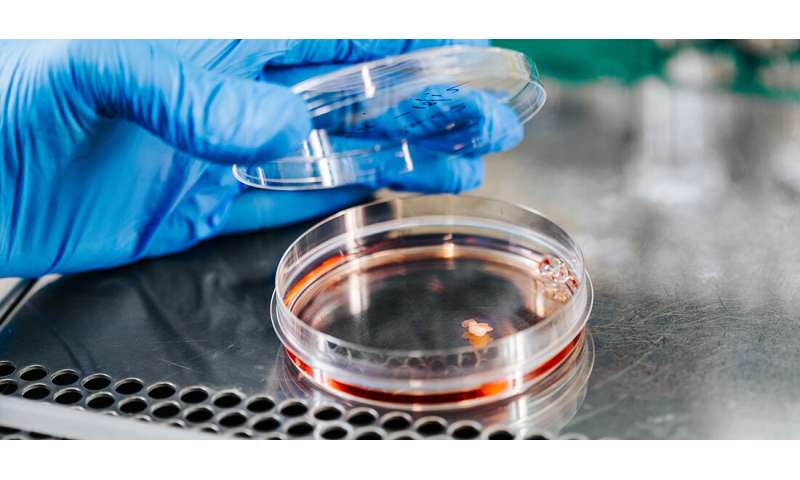 DNA is the hereditary material in humans, a unique cookbook of who we are. This is where you’ll find the answer as to why you have your specific eye and hair colour, or perhaps why you sunburn easily.

Imagine your DNA as a giant cookbook with thousands of recipes. These recipes are genes that have to be read every single day.

The skin cell contains the recipes for all the other cell types as well. All cells of our body have the same “cookbook” with the same “recipes”—even though only a specific set of recipes is read in each cell. The process of reading the recipes is known as transcription.

What determines which recipe should be used in which cell are the little “notes” that “helpers” place on each of the recipes: “Cook this one!” “Don’t use this recipe!” “Watch out for the mistake on page 237!”

While there are many recipes that need to be used in each cell, every recipe needs to result in a five-star dish, every time. However sometimes the food is cooked too fast, resulting in certain dishes being imperfect, a bit too salty, or too spicy. When the “food” is cooked in a hurry, with small mistakes being made in certain dishes, the cells can become cancer cells. The cancer cells are thus like a super-stressed chef.

Similarly, mistakes in some of the “recipes” can lead to other diseases, like ALS or intellectual disabilities.

Is it possible to correct the recipes, or prevent cooking of the bad dishes? In other words, how can we stop cancer cell growth?

The traditional way to treat cancer is to use drugs that remove cancer cells, which contain multiple incorrect “recipes” and divide too fast.

Barbara van Loon came to the Norwegian University of Science and Technology (NTNU) from Switzerland a few years ago as an Onsager and Outstanding Academic Fellow. She worked as research fellow previously at MIT and the University of Zurich.

Very recently she and her research team made a novel discovery about the repair of genetic information, which was published in the renowned journal Nature Communications.

Van Loon’s research team discovered that the “helpers” which read the recipes, and the “helpers” that correct them, work together.

Van Loon says that through cross-talk with transcription machinery repair enzymes both maintain the integrity of genetic information, as well as influence how this information is being used.

The communication between various “helpers” is required, both to correct the mistakes in the recipes, as well as to determine how final dishes will be made.

The findings of Van Loon group provide new insights into maintenance of genetic information, stored within the “cookbook of life”, and have long-term potential to serve as basis for development of drugs to treat diseases, like cancer.

As we all know, during our life, we make good choices as well as certain bad ones. Perhaps we eat too much unhealthy food, or have a bad life style. We may live in a city with high air pollution. Maybe we smoke.

All of these choices can cause changes in the cookbook recipes. Although the recipes were correct to begin with, the life we live can lead to mistakes, which can pile up and consequently lead to onset of diseases, like cancer.

Basic research provides the important knowledge that is the foundation for major breakthroughs in medical treatments.