Patients with COVID-19 can have bowel abnormalities, including ischemia, according to a new study published today in the journal Radiology.

The retrospective study included 412 patients consecutively admitted to a single quaternary care center from March 27 to April 10, 2020, who tested positive for severe acute respiratory syndrome coronavirus 2 (SARS-CoV-2). The cohort included 241 men (58.5%) and 171 women (41.5%), with an average age of 57 years.

Records showed that 17% of patients had cross-sectional abdominal imaging, including 44 ultrasounds, 42 CT scans, and 1 MRI. Bowel abnormalities were seen on 31% of CT scans (3.2% of all patients) and were more frequent in intensive care unit (ICU) patients than other inpatients. Bowel findings included thickening and findings of ischemia such as pneumatosis (gas in the bowel wall) and portal venous gas. Surgical correlation in four patients revealed unusual yellow discoloration of bowel in three of the patients, and bowel infarction (dead bowel) in two patients. 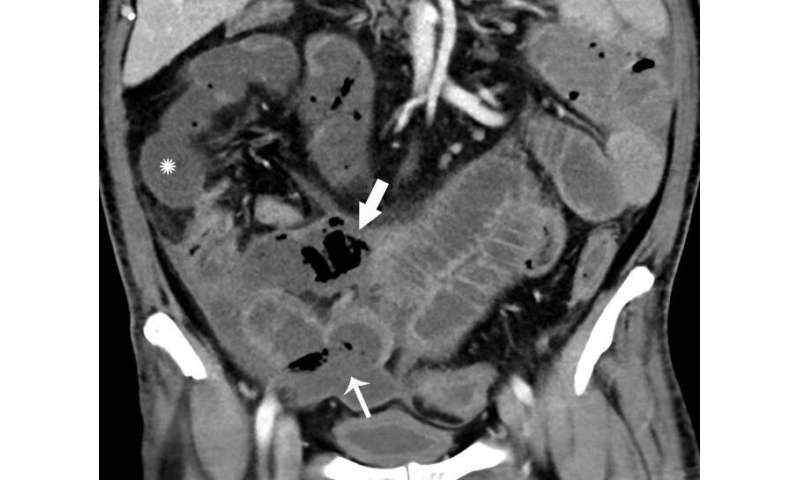 “We found bowel abnormalities on imaging in patients with COVID-19, more commonly in sicker patients who went to the ICU,” said Rajesh Bhayana, M.D., FRCPC, abdominal imaging fellow in the Department of Radiology at Massachusetts General Hospital in Boston.

In two patients who had bowel resection, pathology demonstrated ischemia with patchy necrosis (injury due to reduced arterial flow with patchy areas of cell death). Both had fibrin thrombi (blood clots) in submucosal arterioles (small arteries in the bowel wall), suggesting bowel ischemia in these patients might be caused by these small blood clots. Lung base findings led to a diagnosis of COVID-19 in one patient who presented with abdominal symptoms only. Of right upper quadrant ultrasounds, 87% were performed for liver laboratory findings, and 54% demonstrated a dilated sludge-filled gallbladder suggestive of cholestasis, or a decrease in bile flow.

“Some findings were typical of bowel ischemia, or dying bowel, and in those who had surgery we saw small vessel clots beside areas of dead bowel,” Dr. Bhayana said. “Patients in the ICU can have bowel ischemia for other reasons, but we know COVID-19 can lead to clotting and small vessel injury, so bowel might also be affected by this.” 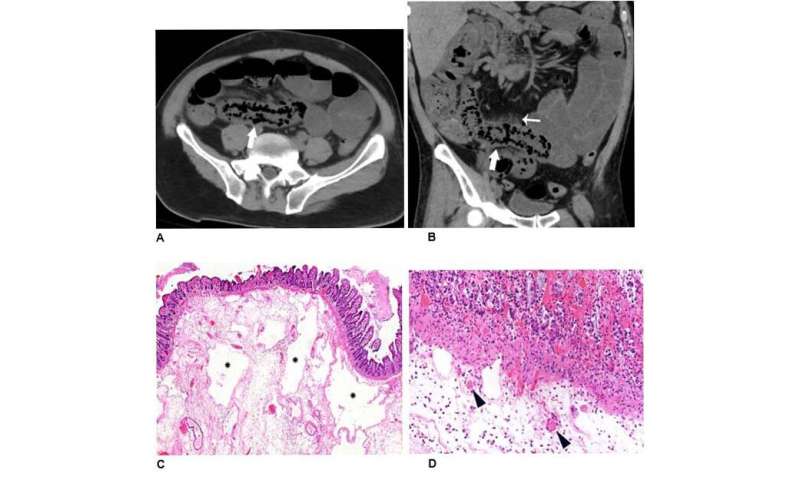 According to the researchers, possible explanations for the spectrum of bowel findings in patients with COVID-19 include direct viral infection, small vessel thrombosis, or nonocclusive mesenteric ischemia. “ACE2 expression is most abundant in lung alveolar epithelial cells, enterocytes of the small intestine, and vascular endothelium suggesting that small bowel and vasculature may be susceptible to SARS-CoV-2 infection,” they wrote.

The authors added that further studies are required to clarify the cause of bowel findings in patients with COVID-19 and to determine whether SARS-CoV-2 plays a direct role in bowel or vascular injury.