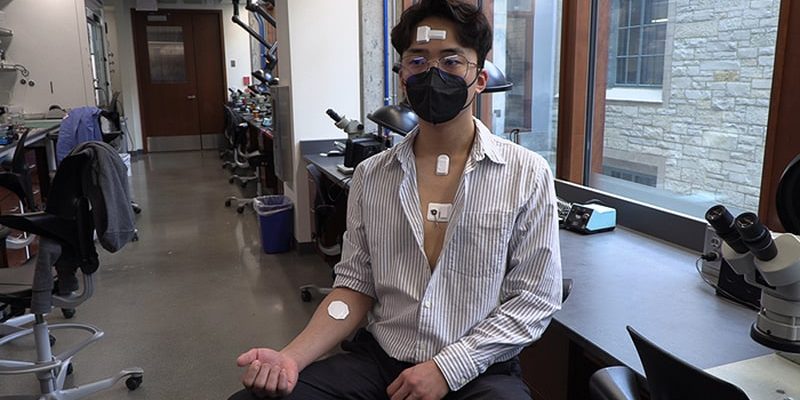 Ten years ago, astronaut Neil Armstrong, the first man to walk on the moon, died not long after undergoing a routine heart surgery to remove a temporary pacemaker. Heavy bleeding occurred when the wires connected to the device were detached.

It’s not uncommon. More than 1 million pacemakers are implanted in people across the globe every year to stabilize abnormal heart rhythms and help prevent life-threatening cardiac problems. In about 5% of patients, however, extraction leads to damage in healthy heart tissue when a pacemaker’s electrical leads (wires connected to the heart) become encapsulated in scar tissue.

“When the leads are pulled out, it can damage the scar tissue and lead to internal bleeding,” said John Rogers, PhD, professor of materials science and engineering, biomedical engineering, and neurological surgery at Northwestern‘s McCormick School of Engineering and Feinberg School of Medicine in Chicago, Illinois. In some cases, like Armstrong’s, the bleeding can be fatal.

But if you could build a wireless cardiac pacemaker — one that breaks down and dissolves inside the body after its job is complete — it would reduce the risk that comes with extraction, said Rogers, who coauthored a recent report in the journal Science highlighting his team’s work developing this technology. A 2021 study first introduced their idea, but this latest research builds on that earlier work, adding wearable sensors that would be used to monitor the device.

How Does the Dissolvable Pacemaker Work?

Called a transient pacemaker, the wireless device can be implanted in patients who need temporary pacing after cardiac surgery or who are awaiting a permanent pacemaker. Once its job is done, the pacemaker “harmlessly” dissolves inside the body, releasing an anti-inflammatory drug to prevent “foreign-body reactions,” according to a press statement.

The device, which does not need electrical leads, connects wirelessly to four soft, flexible, wearable sensors and control units placed around the upper body — on the chest, forehead, throat, and arm. The sensors “talk” with each other, continuously monitoring body temperature, oxygen levels, respiration, muscle tone, physical activity, and the heart’s electrical activity.

“A small lithium battery in the chest patch allows recording of cardiac activity and allows delivery of signals to the pacemaker to activate it when necessary,” said Rogers.

Using algorithms, it picks up on any abnormal cardiac rhythms and helps pace the heart. Meanwhile, physicians can remotely monitor a patient using a smartphone or tablet. When the sensors detect a low battery or a pacemaker malfunction, they can address the issue immediately, contacting the patient to come in if necessary. The patient is not tasked with self-monitoring, Rogers added.

Implantable pacemakers, defibrillators, and electrocardiogram (ECG) monitors have been used for decades. But this new “closed loop” design (which uses sensors to monitor a physiological process in the body and self-adjusts to changing needs) circumvents common shortcomings of implanted devices, like the risk of becoming dislodged or infected, Wolfram-Hubertus Zimmermann, MD, from the Institute of Pharmacology and Toxicology at the University Medical Center Göttingen in Germany, wrote in an accompanying commentary in Science.

A few bugs still need to be worked out before the technology can be used in people. We need to be sure that the data collected are reliable, that safety and effectiveness can be guaranteed, and that misuse can be prevented, he said. And scientists need to create transient devices for different time intervals of function — from days to months, he added.

If those issues can be addressed, long term, the technology holds great promise for clinical use, said paper co-author Igor Efimov, PhD, professor of biomedical engineering and professor of medicine at Northwestern University.

“I believe transient electronics has significant potential in numerous conditions requiring temporary monitoring or therapy,” he said, including cardiovascular monitoring for contractility, aortic pressure, and inflammatory biomarkers. It also has the potential for the management of post-operative complications such as atrial fibrillation, and autonomic modulation of cardiac function in patients with heart failure and atrial and ventricular arrhythmias, he added.

Transient devices are also likely to advance work in tissue engineering, science investigating ways to restore and replace injured or damaged tissue — in burn patients, for example. “They can serve as the backbone of engineered tissue transplants to patients,” said Efimov, “monitoring transplants until they fully integrate with the host organ.”

Among those who could benefit are babies born with a hole in the wall of the heart — a condition that affects 40,000 newborns a year. A quarter of them undergo surgery and require a temporary pacemaker afterward.

The technology is still under study and will need to be validated long-term in large animals and in humans for safety, said Rogers.

Ultimately, it’s about helping patients, he believes. “The motivation here is to improve patient outcomes, get them out of the hospital sooner, and allow them to recover in a home setting,” he said.