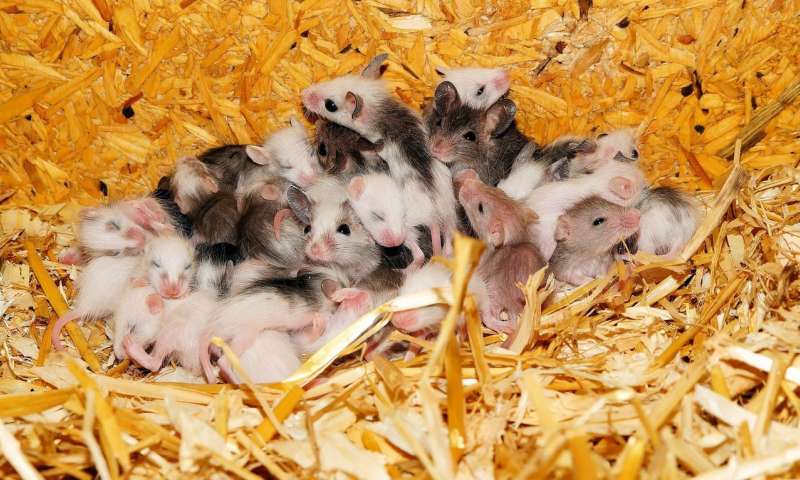 Obese mice with unhealthy lifestyles gain significantly less weight and avoid type 2 diabetes when they receive viruses transplanted from the stool of lean mice. These are the findings of a new University of Copenhagen study.

In recent years, faecal transplants from healthy donors to sick patients have become a popular way of treating a serious type of diarrhoea caused by the bacterium Clostridioides difficile in humans. Recent trials in mice suggest that a similar treatment, in which only the virus in stool is transplanted, may help people suffering from obesity and type 2 diabetes. The majority of virus particles transmitted are so-called bacteriophages—viruses that specifically attack other bacteria and not humans.

“When we transmit virus particles from the faeces of lean mice to obese ones, the obese mice put on significantly less weight compared to those that do not receive transplanted faeces,” says Professor with Special Responsibilities (MSO) and senior author of the study, Dennis Sandris Nielsen of the University of Copenhagen’s Department of Food Science.

The method also seems to protect the mice against developing glucose intolerance (a hallmark of type 2 diabetes), a disease that inhibits the body from properly absorbing sugar. The experiments demonstrated that the obese mice that received an intestinal virus transplant from lean mice reacted to a shot of glucose no differently than the lean ones.

“In the obese mice on high fat diet, that didn’t receive the virus transplant, we observed decreased glucose tolerance, which is a precursor of diabetes. Thus, we have influenced the gut microbiome in such a way that the mice with unhealthy lifestyles do not develop some of the common diseases triggered by poor diet,” explains Ph.D. student Torben Sølbeck Rasmussen, first author of the study.

He emphasizes that the method is not a stand-alone solution and that it must be complemented with a change in diet. Furthermore, the treatment will probably not be targeted at general obesity, but more towards the most serious cases.

It is understood that obesity and type 2 diabetes are linked to imbalances in the gastrointestinal microbiome, also known as gut flora. In recent years, it has been discovered that the composition of viruses in the gut plays a crucial role in the balance of this microbiome.

“If one eats poorly for long enough, they risk creating an imbalance in their intestinal tract. Here, we have a means of recuperating balance by shooting missing virus particles back into the system,” says Dennis Sandris Nielsen.

The researchers extracted faeces from mice fed a standard low-fat diet over a period of time. The stool was then filtered so that all live bacteria were sorted out, while the virus particles—mainly bacteriophages—were concentrated. The viruses were transplanted via a tube into the mice that had been on high-fat diets for 6 weeks. The mice continued the fatty diet for another six weeks. Thereafter, the mice were examined after a glucose test and measured for weight gain.

The study addresses one of the current problems with faecal transplants. Today, stool is transplanted in an unfiltered form, in the belief that it is the gut bacteria which are most effective. However, in rare cases, the method produces side effects when diseases are inadvertently transmitted via the transplanted stool bacteria. Indeed, a patient in the United States died from just such an occurrence last year.

“Our study demonstrates that there is an effect after the live bacteria have been filtered from stool. Therefore, primarily virus particles are transmitted. This makes the method safer,” says Dennis Sandris Nielsen.

He expects that it will be a number of years before the method can be broadly deployed. More experiments are needed, and obviously, human trials as well.

“Mice are the first step. But because the findings suggest that it will work in humans, that is the next. Our hope is that, in the long term, a well-defined cocktail of bacteriophages can be developed that has a minimal risk of side effects,” concludes Dennis Sandris Nielsen.

Faecal transplantation, also known as faecal microbiota transplant, is the transfer of gut bacteria from a healthy donor to a sick recipient. The method used in this study is known as Faecal Virome Transplantation. The method filters stool of live bacteria so that primarily virus particles are transmitted.