In a recent study posted to the bioRxiv* preprint server, researchers investigated whether commensal rodent pests such as rats and mice, sourced from sewers and urban settings, are exposed to and are infected with severe acute respiratory syndrome coronavirus 2 (SARS-CoV-2). They also investigated viruses present in commensal rodents.

Animals acquire viral diseases naturally, and some causative viral organisms might possess zoonotic transmission potential. The coronavirus disease 2019 (COVID-19) pandemic brought the possibility of reverse transmission of SARS-CoV-2 from humans to rodents to the attention of researchers. Rodent species are known to transmit viruses to humans and have been indicted probable SARS-CoV-2 (and other CoV) reservoirs. 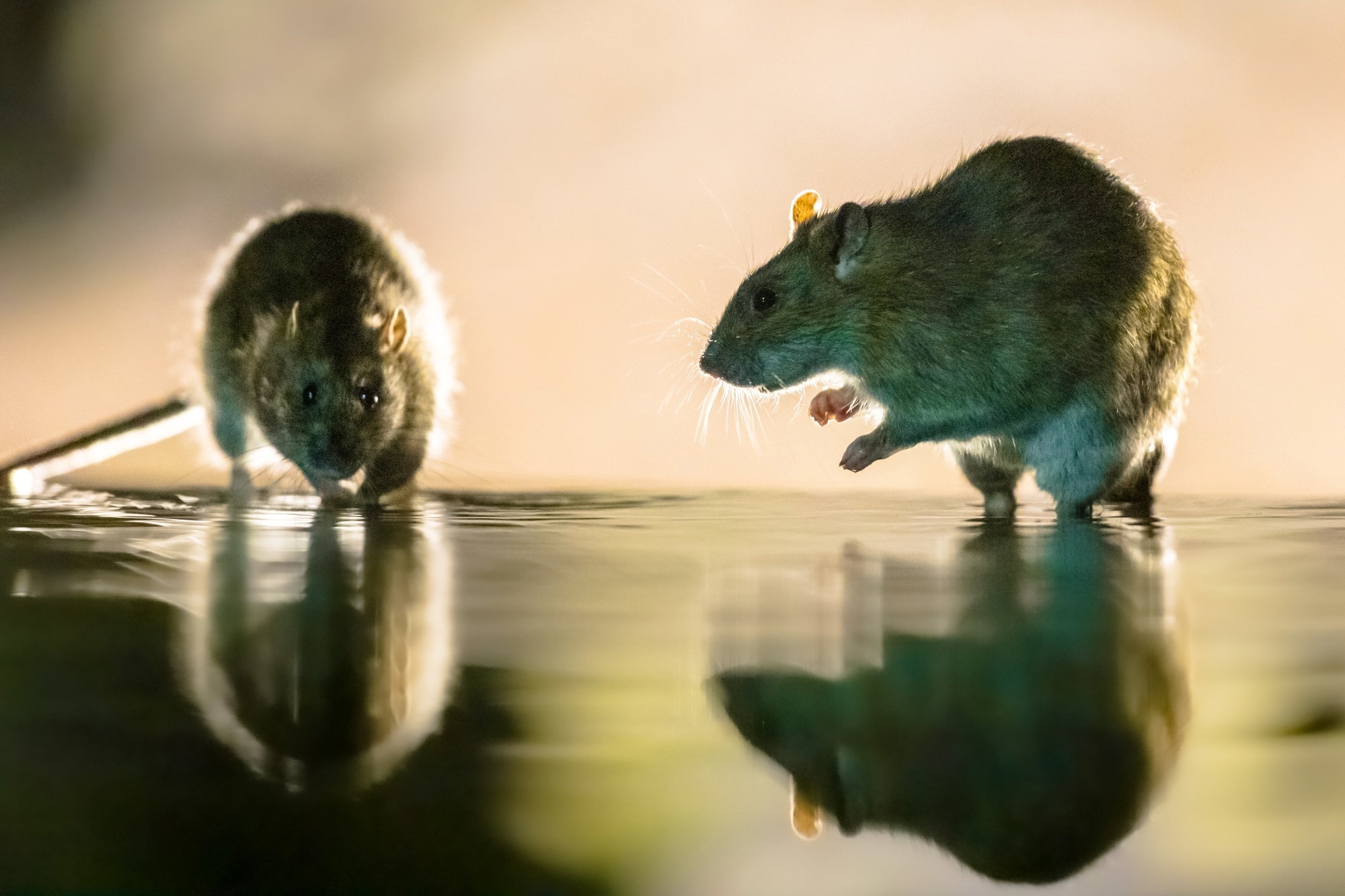 Study: The Ecology of Viruses in Urban Rodents with a Focus on SARS-CoV-2. Image Credit: Rudmer Zwerver / Shutterstock

In the present study, researchers investigated and described the range of viruses found in rats and mice and investigated commensal rodent species’ exposure and infection with SARS-CoV-2.

The team sampled mice (Apodemus sylvaticus) and rats (Rattus norvegicus) from urban environments in 2020 during the human SARS-CoV-2 pandemic. The main trapping occurred between June 15, 2020, and November 20, 2020, in and around the city of Liverpool in England. The team live-trapped 45 and 35 R. norvegicus rats from Greenbank Park and a wastewater treatment facility near Liverpool city center, respectively. Sixty-nine A. sylvaticus mice were trapped in several urban parks of Liverpool, such as Princes Park, Sefton Park, Wavertree Botanic Gardens, and Calderstones Park. Samples of pulmonary and intestinal tissues and feces of the rodent animals were obtained.

Wister rats and C57BL/6J immunized intramuscularly with SARS-CoV-2 S were used as positive controls. In addition to the rodents trapped, 41 rats from south England were provided by pest controllers and sampled from a residential area in Reading and a household waste disposal facility in Basingstoke. Rodents provided by pest controllers were utilized for serological analysis only.

In total, 6.0 x 109 and 1.0 x 1010 reads were obtained for mice and rat samples, respectively, of which 4.0% and 2.0% of reads from the corresponding animals were identified to be of viral origin, respectively. Among the samples, 297 viruses were detected in the samples, of which, 264 viruses, 13 viruses, and 20 viruses, were only detected in rats only, mice only, and rodent species, respectively. Among rats, 97 viral organisms were detected exclusively in pulmonary tissues, seven viruses exclusively in intestinal tissues, and four viruses exclusively in rat feces, with <50% of viruses showing tissue specificity. Most of the viruses detected in the rodents belonged to four families of viruses, i.e., Baculoviridae, Picornaviridae, Astroviridae, or Poxviridae. No virus from the Coronaviridae family was detected in mice; however, the family led to 1.0% of viral diseases among rats.

CoV metagenomic reads were identified in rats, particularly Ferret CoV (alpha-CoV) in seven samples, Rhinolophus bat CoV HKU2 (alpha-CoV) in one sample, and MERS (Middle East respiratory syndrome)-CoV (beta-CoV) in seven rat samples. However, no CoVs were detected above the cut-off among mice, and the PCR analysis showed no SARS-CoV-2 presence in the rodents. Most rodents had very low anti-S IgA and IgG titers, although seven rats had optical densities (OD) comparable to the positive control for pulmonary humoral responses. Three (out of 15) rat cardiac samples showed 36% to 70% SARS-CoV-2 infection inhibition and four rat lung samples inhibited SARS-CoV-2 infection by 39% to 61%.

Overall, the study findings showed no molecular proof of SARS-CoV-2 infection in the rodents, although, in rats, pulmonary anti-SARS-CoV-2 S IgA titers and partial SARS-CoV-2 neutralization were observed. The findings indicated that rat exposure to SARS-CoV-2 or other viruses resulted in cross-reactive antibody titers.

bioRxiv publishes preliminary scientific reports that are not peer-reviewed and, therefore, should not be regarded as conclusive, guide clinical practice/health-related behavior, or treated as established information.

Dr. based clinical-radiological diagnosis and management of oral lesions and conditions and associated maxillofacial disorders.