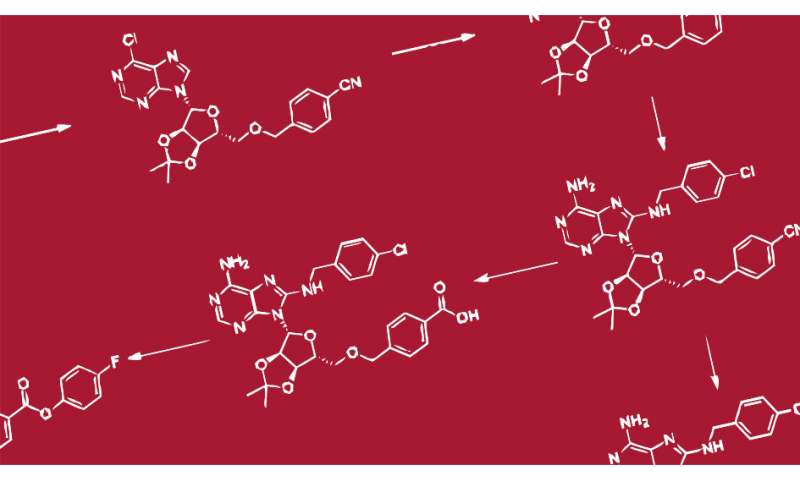 Researchers have enhanced a new method for inhibiting the protein HSP72, known to be important in helping cancer cells survive and resist treatment, which will help scientists move closer to discovering a new cancer drug that targets the protein.

Importantly, the scientists have also developed a test to measure how much more effective their new enhanced approach is compared with earlier attempts at stopping the action of HSP72. The scientists at The Institute of Cancer Research, London, found it was over 100 times more effective.

HSP72, or heat shock protein 72, is important in allowing cancer to take hold—it is responsible for silencing the instructions that normally tell a cancer cell to self-destruct, but it has proven difficult to find drugs to inhibit its function.

Scientists at the ICR have found an approach, which allows them to target HSP72 with a small molecule that forms a chemical bond, permanently destroying its activity and preventing HSP72 from working properly.

The study, published in the Journal of Medicinal Chemistry, builds on earlier work at the ICR. This type of small molecule protein inhibition, using the formation of a chemical bond, is an important mechanism of action in drug design, typically exploiting a particular amino acid in proteins called cysteine.

Unfortunately, cysteine is quite rare in proteins, which has limited the application of this strategy, despite its advantages in inhibiting difficult-to-target proteins. Therefore, scientists at the ICR have been looking to expand this mechanism to other more common amino acids, particularly lysine.

Using lysine in this way is still very new and presents a number of unique challenges but the strategies discovered to optimise these compounds could potentially lead to new drug treatments in the future.

This work, funded through the Ph.D. studentship of Dr. Jonathan Pettinger, created by a philanthropic donation from Luke Johnson, Chairman of the ICR, and by Cancer Research UK.

To measure the effect a drug-like small molecule is having on its target protein, the ICR team developed a new test, using fluorescent polarisation.

Using the new test, the team were able to show a 108-fold improvement in the chemical process that deactivates the target, when compared to chemicals discovered in the very first round of research.

The test can also be used on other drug discovery projects because it will allow researchers to understand how well other, similar prototype drugs are working, and compare them more accurately.

The success of this research has led to continued funding, in collaboration with AstraZeneca and the Medical Research Council (MRC), for a new Ph.D. studentship with James Knox. This research will involve further optimisation to target HSP72 and will expand this concept to kinases—another class of proteins known to be important in cancer.

Targeted treatments against kinases have been highly successful in patient treatment but the cancer often evolves resistance to therapy—causing the drug to stop working. The new lysine targeting approach will aim to overcome this resistance and make tumours sensitive to the therapy again.

This study is just one of many happening at the ICR, which aims to overcome cancer’s ability to evolve resistance to drug treatments.

Our new building, the Centre for Cancer Drug Discovery, which will open later this year, will house teams working on drug discovery and cancer evolution together with the aim of designing drugs, which attack the cancer and circumvent resistance at the same time.

Dr. Matthew Cheeseman, Staff Scientist in the Division of Cancer Therapeutics at the ICR, who led the study, explained: “Targeting the amino acid lysine presents a whole new set of challenges for us. It also presents a really unique opportunity, particularly when it comes to cancer drug resistance.

“When we target an exposed cysteine residue, what we often find is that cells quickly evolve to replace the cysteine with something else, and our drug no longer works.

“However, there are many more lysines in proteins and they often possess a critical role in the function of the protein. We believe the cell will be unable to replace the lysine with an alternative amino acid without losing the protein’s function.