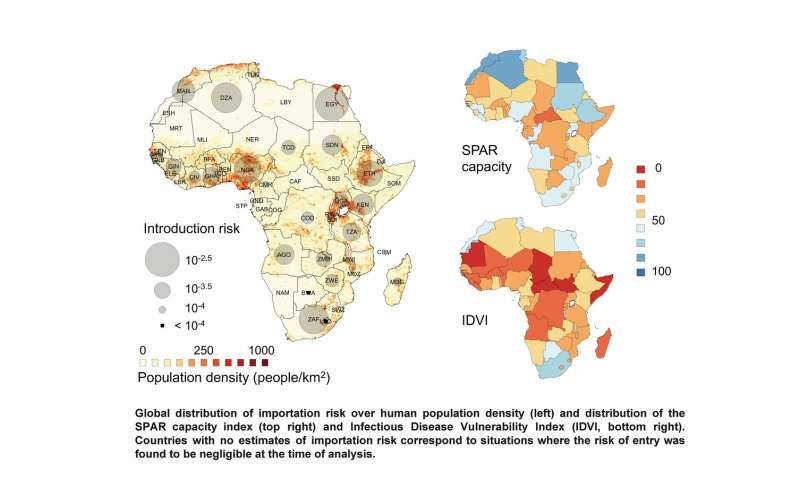 Egypt, Algeria and Republic of South Africa are the African countries most at risk for coronavirus COVID-19 importation in the continent, due to high air traffic with the contaminated Chinese provinces. But these countries are also among the best equipped on the continent to quickly detect and deal with new cases. In other African countries, the risk of importation is lower, but health organizationdeficiencies raise concerns about rapid spread.

The COVID-19 coronavirus continues to spread in China and cases have been reported in more than 25 countries. The African continent was spared for a long time until a first case was recently reported in Egypt. Vittoria Colizza, research director at Inserm (French Institute for Health and Medical Research), and her team from Unit 1136 Pierre Louis Institute of Epidemiology and Public Health (Inserm / Sorbonne University), in collaboration with the Université libre de Bruxelles, the Oxford Martin Programme on Pandemic Genomics and the University of California Los Angeles, assessed the risk of importing the virus into Africa, country by country, and the capacities of each of them to detect and deal with it.

The researchers evaluated the risk of the virus importation according to the number of cases declared by each chinese province and according to air traffic between the threemain airports of each of these provinces (except Hubei due to flights suspension) and each African country. Moreover, they analyzed the potential of each country to facethe risk of the spread of a contagious disease using WHO data and official data.

Each country makes a mandatory annual declaration to the WHO of its resources to deal with an epidemic (State Parties self-assessment Annual Reporting SPAR). It includes twenty-four items weighted into an overall score between 0 and 100, 100 showing a strong preparedness to face an epidemic.

The researchers also took into account the IDVI score (for Infectious Disease Vulnerability Index), also noted out of 100, 0 corresponding to an extreme vulnerability and 100 to the lowest vulnerability. The IDVI takes into account factors not directly linked to the health system but which can influence the response to an epidemic: the size of the population, the socio-economic level or even political stability. Thus, highIDVI and SPAR scores are predictive to an efficient response in case of virus importation. 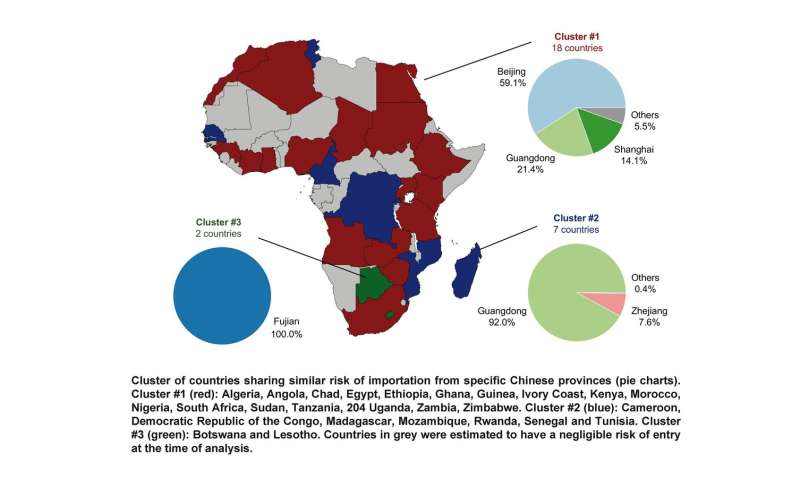 The results show that Egypt, Algeria and Republic of South Africa are the countries most at risk of importing the virus to Africa due to high trade exchanges with China.On the other hand, their SPAR and IDVI scores are among the best on the continent, letting expect effective detection and containment of the virus. Other countries asNigeria, Ethiopia, Sudan, Angola, Tanzania, Ghana and Kenya, are at lower risk of virus importation but their SPAR and IDVI scores are lower, raising fears of the nondetectionof possible imported cases and of local or even national spread.

Finally, the researchers clustered the African countries at risk into three groups according to the influence of the Chinese provinces in these countries. Thus, a first group including 18 countries will be more vulnerable in the event of a major epidemic in the province of Beijing, a second comprising 7 countries will be more exposed in the event of a strong growth of the epidemic in the province of Guangdong and a third group of two countries is risking virus importation only from Fujian province.