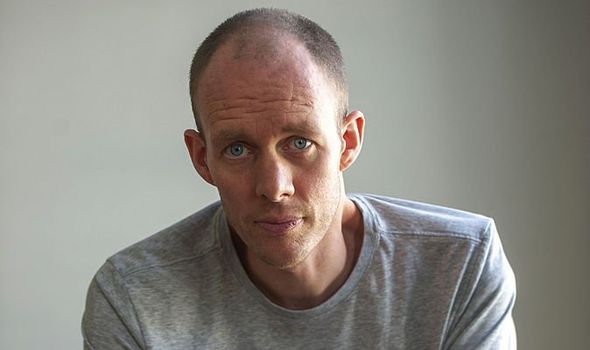 He has undergone six operations to cut out the cancer from his neck since it was diagnosed in 2010, and the fourth procedure, in March 2016, left him paralysed down one side of his body.

David, 41, an MBE who has represented Great Britain in skiing, athletics, cycling, bobsleigh and karate, and who won a gold medal at the London 2012 Paralympics, claims he should have been offered radiotherapy instead of undergoing risky surgery.

The 6ft 4in British champion says he is taking legal action against Oxford University Hospitals NHS Foundation Trust, which carried out the repeated surgery, to highlight the unmet need for radiotherapy among cancer patients in Britain.

He says he also wants to make sure future mistakes don’t happen.

He said: “You rely on doctors to make the best decisions for you. If I had been successfully treated with radiotherapy in 2014, known then to increase survival rates for patients with my form of tumour, I wouldn’t have needed the surgery in 2016 which paralysed me.

“Someone needs to be made accountable. There are many other people who are not given appropriate radiotherapy in this country and this needs to be addressed.”

He said he suffers daily despite his apparent strength and resilience.

He said: “It breaks my heart. I am still competing at an international level and people think I’m superhuman to do these things in sport.

“I can swim an iron man distance, ride 1,000 miles but getting ready to swim is harder than the swim itself. I do sport because I have nothing else.

“Having the spinal cord injury is worse than having the tumour. I would be happy to lose everything and wake up on the streets if I could have my limbs back. There are days when I lie in bed and just don’t function. I cry myself to sleep.

“I can no longer do what most people take for granted, like have sex with a partner, despite feeling desire, and just about everything in a day from brushing my teeth to getting a night’s sleep.

“I am a prisoner in my own body which is also in pain all the time as I cannot move properly.” 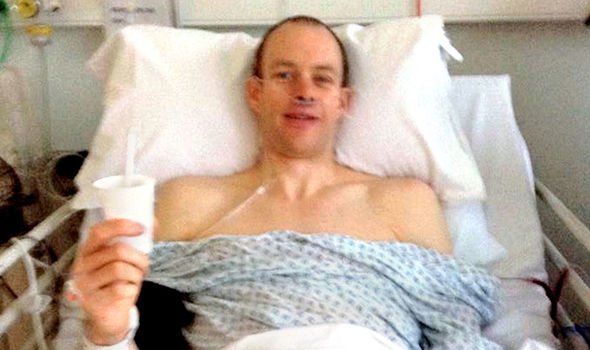 Despite this, David, from Aviemore, Scotland, who began his sports career as a teenager, has continually astounded doctors, his fans and the sports world by competing at an international level following all his six surgeries.

Although he developed symptoms of the tumour aged 18, and repeatedly visited his GP complaining of severe pain throughout his body, fatigue, numbness and loss of bladder function the cancer was misdiagnosed as chronic fatigue syndrome.

David was a talented amateur athlete competing in athletics and karate as a teenager and young adult. In 2008 he learnt having a club foot made him eligible for the Paralympic team.

However, two years later, in April 2010, his tumour was detected.

It had seemed unlikely David would compete again after each of his subsequent operations, especially after the first, in May 2010, which left him temporarily paralysed due to a blood clot in his neck.

The clot was removed and he gradually learnt to row again.

He said: “At first I couldn’t even walk, but I set my goal to row at the highest level again. At 7am every day I would get up, shut my eyes and visualise getting back in the boat and doing a session. I would see the water, hear the sound of the boat as it entered.

“Every hour I had planned – doing the basics at first – walking or catching a ball. Within three months I was in a top level indoor rowing machine although I was still numb from the neck down. It felt like being covered in bubble wrap. It was dreadfully slow at first. After six months, in November 2010, I got back on the water in time to train for the Paralympics.”

After winning the London Paralympics in August 2012 David took up a place on the British cycling team with the hope of going to the Rio Olympics.

However after a year of training his tumour had regrown and further surgery was carried out in October 2014.

Undeterred, he continued training. However in September 2015 a scan showed his tumour had re-grown once again. 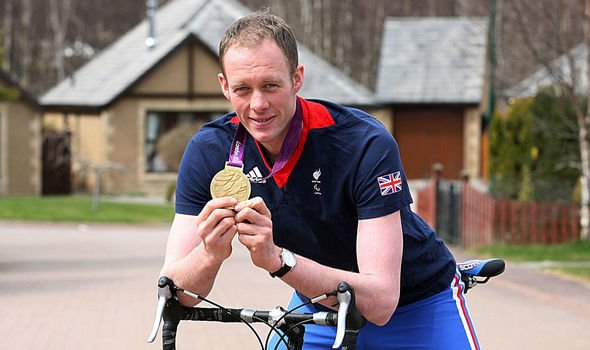 Surgery was carried in March 2016, this time leaving him paralysed down one side. This time the damage was permanent.

He said: “When I woke up in the intensive care unit I couldn’t feel my leg or arm. I thought it was temporary.

“Eight weeks later I was still lying on the neurological ward and no feeling was returning. I was wheeled out and transferred by ambulance to a spinal hospital. I saw outside for the first time in two months and felt the fresh air, which brought a tear to my eye.

“I was asked by my physio what my goals were and I said, ‘I’d love to cycle for Great Britain’. She replied, ‘Let’s see if you can brush your teeth’.”

He added: “I pushed myself to the hospital sports centre and managed to climb on to a bike. I never received an apology or explanation about what had happened in that failed surgery even though I tried to find out.

“I was told I would never walk again. But I walked out of that hospital after two months in June 2016, then spent £15,000 at a private specialist rehab centre.”

Despite his partial paralysis David subsequently managed to get back into the British Paralympic team on an adapted bike and went on to achieve both goals he had set from his wheelchair in hospital – riding for Great Britain at the world (Union Cyclist International) championships in July 2018 and riding across the French Grandes Alps – 740km in seven days – in September 2018.

He uses a specially adapted bicycle.

David has since transferred from Oxford’s John Radcliffe Hospital to London’s University College Hospital where he has been successfully receiving radiotherapy since March last year.

His lawyers are likely to highlight the fact that radiotherapy has been shown to successfully treat his rare tumour, a hemangiopericytoma, since the 1990s.

David, who is now funded by Nike and who campaigns with Radiotherapy4Life, said: “I have recurring dreams of running, swimming and moving properly again. It is always a shock after I wake up when the truth hits me again.”