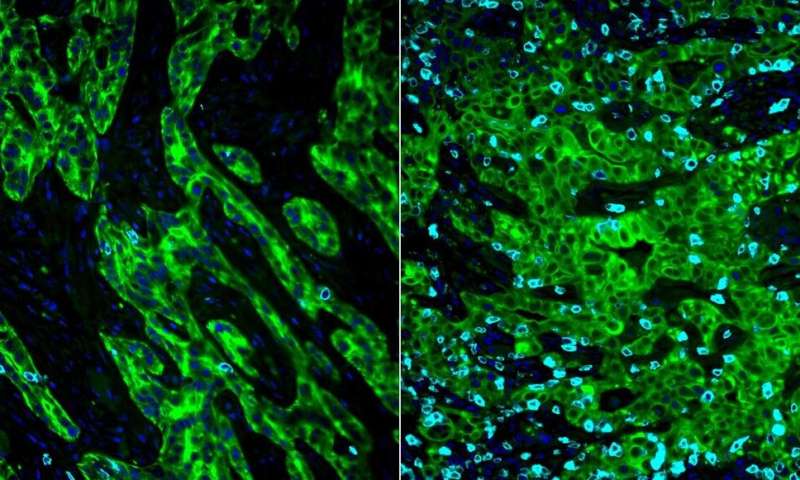 Pancreatic cancer cells use a normal waste removal process to hide tags on their surfaces that would otherwise let the immune system destroy them, a new study from NYU Grossman School of Medicine finds. Published online April 22 in Nature, the study results help to answer a longstanding question: why are pancreatic cancers so resistant to immunotherapies, which use the body’s own immune defenses to fight cancer?

The work focused on the major histocompatibility complex class 1, or MHC-I, a group of proteins that displays certain protein fragments on cell surfaces. T cells of the immune system ignore cells with MHC-I displaying “self” tags specific to each person’s cells, but recognize and attack cells with strange tags, like those on cells infected with viruses, and in some cases on cells that have become cancerous.

Led by researchers from NYU Langone’s Department of Radiation Oncology and Perlmutter Cancer Center, and the University of California, San Francisco (UCSF), the new study found that in pancreatic cancer, MHC-I is pulled into compartments called vesicles inside the cancer cells and degraded by autophagy, a normal process that recycles damaged cellular components. By removing the MHC-I tags, autophagy enables cancer cells to avoid notice by the immune system, and makes them resistant to immunotherapies, researchers say.

“Our findings show that blocking autophagy, either genetically or with drugs, enhances the expression of MHC-I on the surface of pancreatic cancer cells,” says senior study co-author Alec Kimmelman, MD, Ph.D., the Anita Steckler and Joseph Steckler Chair of and professor in the Department of Radiation Oncology at NYU Langone.

“This newfound role in immune evasion adds to the growing body of evidence that supports the targeting of the autophagy pathway in pancreatic and other cancers,” adds Dr. Kimmelman, also a senior leader of Perlmutter Cancer Center. Previous studies from Dr. Kimmelman’s lab, for instance, had found that pancreatic cancer cells also harness autophagy to create a supply of degraded cellular components as fuel for malignant cell growth.

Pancreatic ductal adenocarcinoma (PDAC), the most common form of pancreatic cancer, is among the cancer types for which immunotherapy using drugs called checkpoint inhibitors has been largely ineffective. Although the reasons that such therapies fail against some cancers is complicated, genetic changes (mutations) that lead to a loss of MHC-I on tumor cell surfaces have been hypothesized as one cause, says Dr. Kimmelman. PDAC tumors, however, do not have these mutations, suggesting that other mechanisms are at work.

Dr. Kimmelman and senior study co-author Rushika Perera, Ph.D., at UCSF independently determined that a significant fraction of MHC-I no longer resided on the surfaces of pancreatic cancer cells, but instead was found inside the cells. The two labs then collaborated to show that an autophagy protein, called NBR1, attaches to MHC-I, which sets it up to be trafficked to autophagosomes and then lysosomes, where it is broken down like cellular waste.

Experiments in mice with pancreatic cancer showed that blocking autophagy either with genetic approaches or with the anti-malaria drug chloroquine caused an increase in MHC-I molecules on the surfaces of the tumor cells. Chloroquine and its derivative hydroxychloroquine, the latter of which is being tested as a possible treatment against 2019 coronavirus disease (COVID-19), are known to inhibit autophagy by the same mechanism. The authors also found in mouse studies that combined chloroquine with two checkpoint inhibitors significantly increased tumor responses over that achieved by the immunotherapies alone.

The researchers also studied tumor cell lines from non-small cell lung cancers and found that MHC-I is also targeted for degradation by autophagy in a fraction of these tumors. The finding suggests that resistance to immunotherapy caused by internalization of MHC-I seen in pancreatic cancer cells could be at work in other cancer types.

Clinical trials for patients with pancreatic cancer have shown that hydroxychloroquine, combined with standard chemotherapy, increases a patient’s response to chemotherapy. The new findings suggest hydroxychloroquine could also improve the effectiveness of immunotherapy. While promising, such combinations need to be studied further before they can be tested clinically, Dr. Kimmelman cautions.