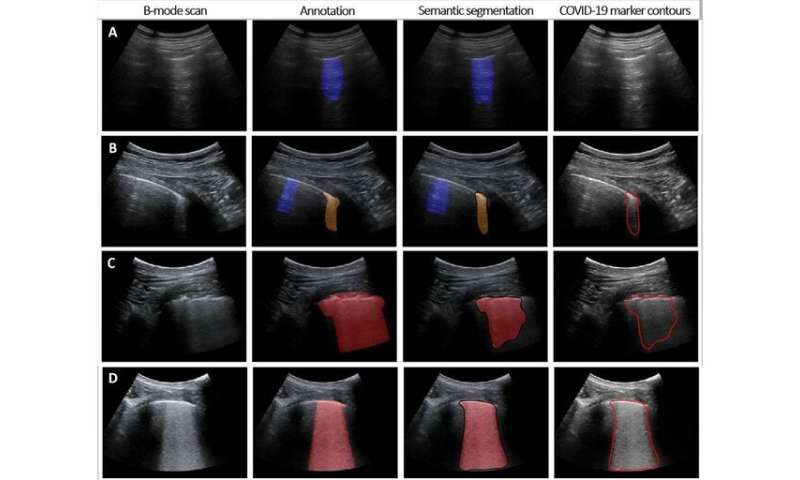 Establishing whether a patient is suffering from severe lung disease, possibly COVID-19, within a few minutes is possible using fairly simple ultrasound machines that are enhanced with artificial intelligence. A research team at Eindhoven University of Technology (TU/e) and the University of Trento in Italy has been able to translate the expertise of top lung specialists into a software update for these ultrasound machines. This enables relative laymen to interpret the images in a manageable and comparatively inexpensive manner, just like the world’s best lung experts.

Ruud van Sloun, Assistant Professor and researcher at TU/e, worked day and night on this alongside four Ph.D. students from Eindhoven: “With artificial intelligence, the most important biomarkers of severe lung diseases such as COVID-19 can be accurately determined on a lung ultrasound that visualizes the abnormalities at the edge of the lung and the changes in the structure of the network of pulmonary alveoli and interstitial tissue. And because it’s a program which learns, it becomes even smarter with each new use, allowing it to even more accurately determine whether or not the patient may have COVID-19. We’re very optimistic regarding its quick application in hospitals and emergency rooms.”

Following the publication of the research in the leading scientific journal IEEE transactions on Medical Imaging, the new technology will be offered to hospitals, amongst other the Catharina Hospital Eindhoven. The team in Trento, headed by Dr. Libertario Demi, is coordinating this implementation effort. Eventually, the software update could be installed directly on ultrasound machines, so that doctors have everything at their disposal, in real-time.

According to Ruud van Sloun, this technology offers excellent prospects for improving intake and triage at hospitals. “A hospital often has dozens of ultrasound machines. In contrast to the current swab test, for which the results may take up to 24 hours, ultrasounds take only a few minutes. As a result, you might be able to examine five or more patients per hour with one machine. With many thousands of machines in the Netherlands, the potential capacity for testing, monitoring of therapy, and follow-up is enormous,” says van Sloun.

This solution also offers various advantages over alternative imaging technologies such as CT or MRI: there are many more machines available (including in developing countries and rural areas), these are portable and manageable, do not use radioactive radiation (as with CT), have a minimal risk of contamination through the use of a cover around the sensor, and are comparatively cheap.