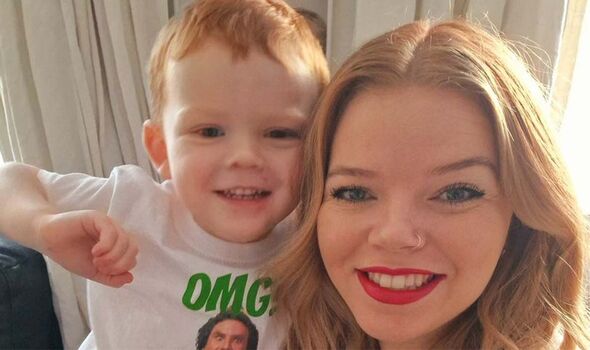 A mum has claimed she was told to take her toddler to hospital herself or face a due to a two-and-a-half hour wait for an ambulance after he had a fit as major delays hit the service.

Michelle Balmforth’s three-year-old son Jaxson had a temperature of 38.4 on Christmas Day morning. As the day went on, he became more poorly as he became unresponsive, his eyes glazed over and he was feverish.

She didn’t realise at the time that her son was having a fit, reports HullLive, but her mother-in-law, whose house she was at, knew how to help him. She took all his clothes off and rubbed a wet flannel across his body to try to cool him down but he still had a temperature and was shivering.

After struggling to get an ambulance, they took Jaxson to Hull Royal Infirmary themselves where doctors found that he tested positive for flu type A and he had had a febrile convulsion.

Michelle said: “The whole time it was happening I completely melted down like I couldn’t even look at him because I didn’t even know what to do to help him. As a mum, it’s the worst feeling in the world not knowing how to help your child. It’s really quite frightening when you see someone so little so helpless and you don’t know what to do to help them. I can’t praise my mother-in-law enough because my thoughts afterwards were what if I was home alone with him.

“I would have not known how to help him but my mother-in-law has five kids of her own and grandkids as well so she’s become a bit of a pro over the years. Without her I honestly don’t know if Jaxson would be alive.”

When Michelle noticed that her son had a temperature in the morning she gave him some Calpol and he “seemed to pick up” as he danced and played and was excited about it being Christmas Day but at around 3.15pm when she went to check on Jaxson, who was on the sofa, he was not responding to her when she asked him if he was okay and he “didn’t look right”.

Her mother-in-law ran a tepid bath for Jaxson and lowered him in it and tried to cool him down by rubbing a flannel across his body and after eight to ten minutes of him fitting he “finally came around”. However, Michelle said he was shivering even though he was still warm so she called an ambulance at 3.30pm and was told that someone would come soon.

She was advised not to wrap him up too much that he has another fit and to keep him as comfortable as possible, but at 4pm she noticed that he was still very feverish and she took his temperature which was 38.3. At 4.30pm she said that she called for an ambulance again but was told that there was a two-and-a-half-hour delay on ambulances so it would be better if she took Jaxson to hospital herself.

Michelle added: “This obviously infuriated me because if I had known this an hour before we would have taken him straight to the hospital regardless. We took him straight to Hull Royal Infirmary to the children’s A&E and he really wasn’t well and I said we called for an ambulance over an hour ago, nobody has come so they let us be seen straight away. We went straight in and they did all his observations and said he was still running a temperature so they wanted to admit him to the children’s ward in the main building so they can observe him for a few hours.

“We went across with them and he was asleep for about three hours I think and when he came round they did loads of observations on him and loads of tests and it came back that he tested positive for flu type A. We didn’t realise he contracted the flu from anywhere.”

Michelle said she was told that Jaxson had a febrile convulsion which is a fit that can happen when a child has a fever. She claimed that a child of Jaxson’s age cannot process the thought of taking off their clothes when they get warm and when they get too hot too quickly the brain “shuts down” because it cannot cope with the heat, causing the child to have a fit.

Jaxson was discharged from the hospital at around 10pm on Christmas Day and Michelle said he was given a prescription which they could not access. She went to a number of pharmacies but none had the medication Jaxson needed.

A spokesperson for Yorkshire Ambulance Service NHS Trust said: “We are sorry to learn that concerns have been raised about our response to Michelle Balmforth’s 999 call regarding her young son, and would encourage her to get in touch with our Patient Relations Team so we can liaise with her directly about specific details relating to this. We understand that Michelle did take Jaxson directly to hospital on Christmas Day and are pleased that he has now recovered from his illness.

“Like all other ambulance services across the country, we have been experiencing significant operational pressures for a prolonged period. This has been exacerbated by lengthy handovers at many hospitals and, whilst our dedicated staff are doing their best to respond as quickly as possible to all emergencies, we acknowledge that some patients are having to wait longer for an ambulance response.”

After the experience Jaxson had, Michelle asked her good friend Yasmin Clappison, the managing director of wedding venue The Beverley Barn, if there was any way they could arrange a first aid course for children.

Michelle was sure that there would have been other parents who would be unable to help their child if they were in the same situation that she was in with Jaxson and she wanted to find a way she could get “some even basic first aid knowledge” so if anything was to happen to Jaxson again, she would know how to help him.

The Beverley Barn put out a post on Facebook and people offered to help to host a first aid course and others said they were interested in taking part. Michelle was overwhelmed by the response.

Michelle added: “Just the response we got was amazing from people that were offering to help us and host first aid courses and then then the amount of people that were interested in doing it as well. It’s been quite overwhelming but quite nice to know that there’s support out there.”