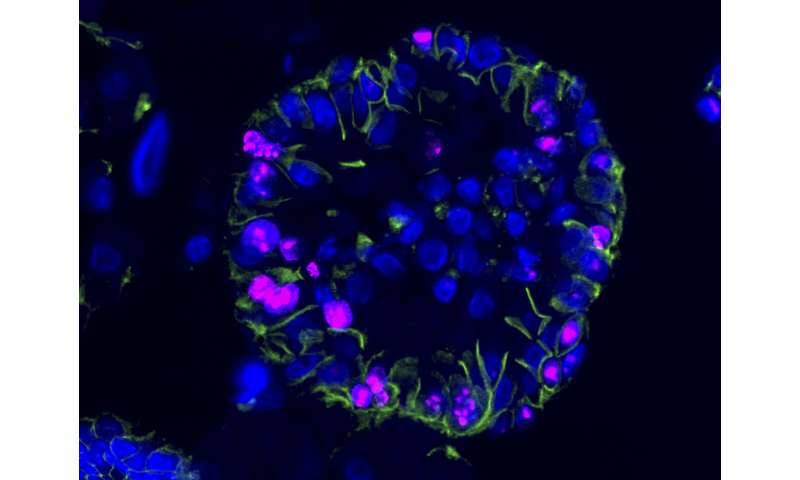 Scientists at the MDC have discovered stem cells responsible for the most common form of kidney cancer. The team of Walter Birchmeier has found a way to block the growth of these tumors in three models of the disease.

Not all cancer cells are equal. Tumors contain potent cancer stem cells that produce metastases and can regenerate the disease if they escape a treatment. This makes them vital targets for therapies, if scientists can isolate them and probe their weaknesses. But the cells are often so rare that they have yet to be found for many types of cancer,.

Professor Walter Birchmeier’s lab at the Max Delbrueck Centrum for Molecular Medicine in the Helmholtz Association (MDC), in a collaboration with the Urology Department of the Charite, has now discovered cancer stem cells responsible for the most common form of kidney cancer: clear cell renal cell carcinoma, or ccRCC. In a Berlin-wide collaboration, the scientists found a weakness. The cells depend on two critical biochemical signals. Blocking them both hinders the growth of tumors in several laboratory models of the disease, suggesting a promising new approach to treating human patients. The study appears in the current issue of Nature Communications and includes authors from the MDC, the Urology Department of the Charite Berlin, the Berlin Institute of Health (BIH), the Screening Unit of the Leibniz Institute FMP, the company EPO, and other partners.

Identifying ccRCC cancer stem cells was crucial to the project. Dr. Annika Fendler, a postdoc in the Birchmeier group and a member of the Charite Urology Department, was first author on the paper. She identified three proteins on the surfaces of the cells that enabled them to be tagged and then isolated. This permitted Dr. Hans-Peter Rahn to isolate the cells using fluorescence-activated cell sorting (FACS). The scientists found that cancer stem cells accounted for only about 2% of the total found in the human tumors.

“Our analysis of these cells shows that they depend on signals passed along two biochemical networks called WNT and NOTCH,” Fendler says. Because these networks were known to play roles in other types of cancer, the lab has learned to disrupt them. They had already developed a potent inhibitor of WNT signals with the FMP, their partner institute on campus.

Previously a role for WNT and NOTCH had not been suspected in kidney tumors; mutations in these networks are rarely found in the disease. Both signals are, however, linked to a tumor suppressor gene called VHL, which is strongly associated with ccRCC. The new findings suggested that blocking WNT, NOTCH or both signals might target the cancer stem cells and interfere with the most aggressive components of the tumors.

In the clinic, inhibitors against various biochemical pathways are increasingly replacing chemotherapy in treatments for cancer patients. “But you have to know what pathways to target,” Fendler says, “and not enough was known about the biology of ccRCC.”

The promise of multiple model systems

Initial tests of the new inhibitors were promising. “Remarkably, three quarters of cell cultures derived from the patients responded to at least one type of inhibitor, and 50 percent of the rest were inhibited in the presence of the two inhibitors,” Birchmeier says.

But here the lab confronted one of the main challenges of cancer research. “What we learn in the lab is usually very difficult to translate into the real context of a patient,” Birchmeier says. “Regular cell line cultures and animal models obtained from other labs don’t reflect the complexity of a disease in a person’s body.” A solution is to develop more types of models which are closer to the human disease.

Birchmeier and his colleagues were already proficient at extracting cancer stem cells from patients, growing them in cultures and challenging them with a huge palette of drugs. In collaborations with the company EPO on the Berlin-Buch campus, they have also transplanted patients’ cancer stem cells into mice, which develop tumors virtually identical to those of their human counterparts. These animals are essential in the search for therapies: what cures a human tumor in mice might also work in a patient. In the current project, EPO injected WNT and NOTCH inhibitors, singly and and combinations, into tumor-bearing mice and observed what happened. Blocking both signals turned out to be the most effective strategy. But would it work equally well in humans?

A new type of model

Very recently scientists have learned to use patient cells to generate organoids: miniature versions of organs, containing many types of cells. They are composed of human tissue, but can be used without the ethical problems of testing drugs on human patients. Organoids had already been created for healthy kidneys, various organs, and tumors such as colon cancer.

“Other groups had tried with ccRCC, but had been less successful,” Fendler says. “The tissue didn’t grow very well or did not produce organoids. Both of these factors are important in developing models for drug testing and treatments. A patient with the disease needs fast and reliable models on which treatment responses can be tested.”

“The most crucial finding from the study,” Birchmeier says, “is to have identified the essential roles of WNT and NOTCH signaling systems in ccRCC, and to show that inhibiting them has an impact on the tumors.” There remain subtle differences between the model systems that still need to be explored; at the moment, studies of mice are still needed.