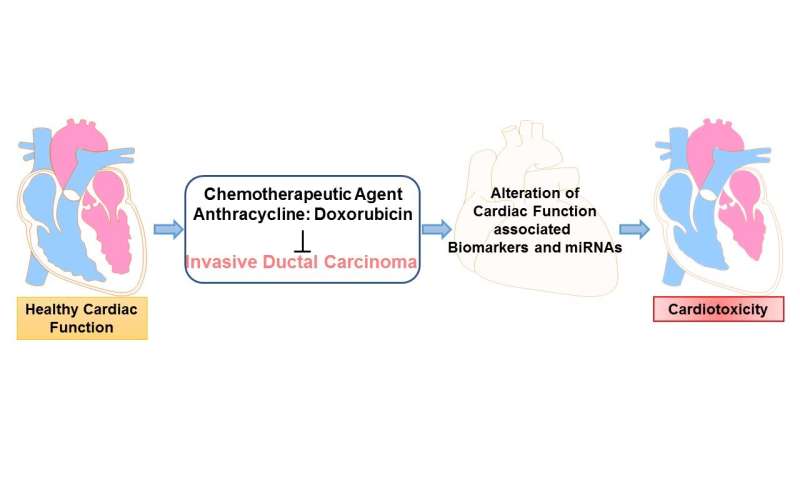 Scientists have identified a collection of biomarkers that together signal that a person’s cancer treatment may be harming their heart. After further validation, the biomarkers could eventually allow doctors to assess cardiovascular side effects of chemotherapy with a simple blood test early in the treatment process.

Heart problems are a side effect of several cancer therapies. Anthracyclines, a family of chemotherapy drugs used to treat many types of cancer, carry a particularly high risk. For example, about 17% of patients receiving anthracycline for the most aggressive forms of breast cancer have to stop therapy due to cardiac complications.

Doctors typically use echocardiograms, an ultrasound of the heart, to look for signs of heart damage at various points during treatment. However, echocardiograms can be expensive, and they show problems only after damage has already occurred.

“Compared to the current standards for diagnosing chemotherapy-related cardiac dysfunction (CRCD), the biomarker panel we have suggested would be cost effective and easy to implement, but more importantly, would aid in earlier diagnosis, risk assessment and CRCD progression monitoring that would ultimately improve patient care and outcomes,” said study author Hari Vishal Lakhani, a clinical research associate at the Marshall University Joan C. Edwards School of Medicine. “It is especially relevant to patients in rural, lower socioeconomic communities, who may not be have access to serial echocardiography as a means to diagnose CRCD.”

Lakhani was scheduled to present the research at the American Society for Investigative Pathology annual meeting in San Diego this month. Though the meeting, to be held in conjunction with the 2020 Experimental Biology conference, was canceled in response to the COVID-19 outbreak, the research team’s abstract was published in this month’s issue of The FASEB Journal.

The results revealed significant differences in the levels of a dozen biomarkers related to cardiovascular changes between the two groups. While no single biomarker was sufficient to predict CRCD on its own, in combination they provided a reliable predictor of heart toxicity as assessed with echocardiography. Many of the biomarkers showed detectable changes well before heart damage was visible on an echocardiogram.

The biomarkers include a variety of proteins as well as microRNAs (miRNAs), which affect gene expression. The particular miRNAs identified in the study have previously been implicated in cardiac dysfunction and the proteins have been linked with inflammation, damage to the heart muscle and other processes involved in heart disease.

“Our results support the clinical application of these serum biomarkers and circulating miRNAs to develop a panel for early diagnosis of chemotherapy-related cardiac dysfunction which will enable early detection of disease progression and management of irreversible cardiac damage,” said Lakhani. “A biomarker panel may in fact be better than serial echocardiography, because the information gathered from a biomarker panel could allow appropriate intervention to be taken before any cardiac damage has occurred.”