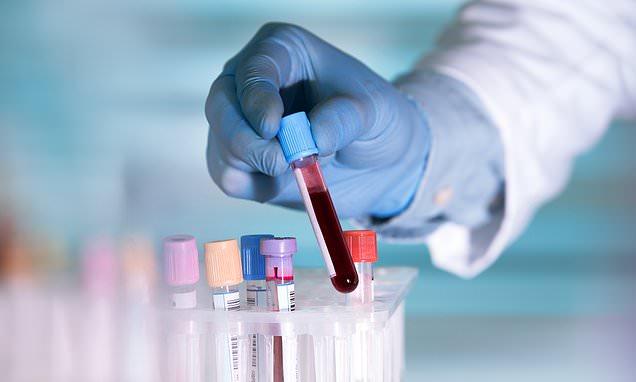 Blood test can predict how prostate cancer will respond to treatment and if a patient will relapse, study shows

A simple blood test could help flag when men with prostate cancer are not responding to treatment or are more likely to relapse.

The ‘liquid biopsy’ was evaluated for efficiency on more than 1,000 blood samples from 216 men with advanced prostate cancer who were having treatment.

Researchers led by The Institute of Cancer Research (ICR) in London found the test can detect traces of cancer DNA in the bloodstream.

It could lead to tailored treatment for those in the advanced stages of the disease and help doctors decide when to stop drug that aren’t working as well. 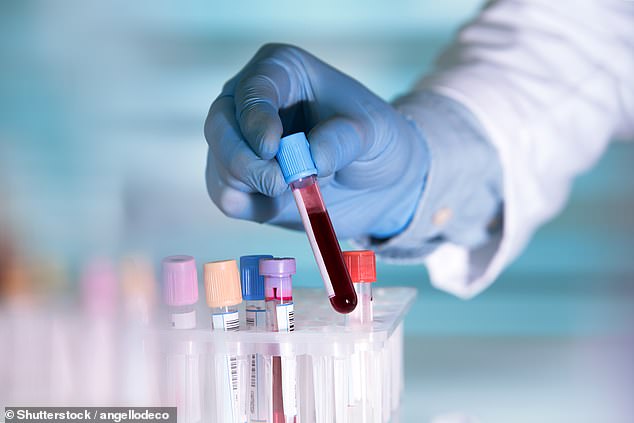 The study looked at blood samples from men who were part of a clinical trial of the targeted drug abiraterone with or without an experimental drug, ipatasertib.

The results showed that men with high levels of tumour DNA at the start of treatment had a significantly worse outcome.

Their disease progressed two and a half months earlier than those negative for ‘ctDNA’ at the start of treatment.

The team looked at blood samples over the course of the treatment with repeated tests, and found those who responded to treatment had the greatest fall in the amount of cancer DNA in their bloodstream.

Cancer DNA dropped by 23 per cent –  while those who partially responded to treatment had a reduction of 16 per cent.

Men whose prostate cancer continued to get worse or stayed the same only saw a reduction of one per cent or four per cent, respectively.

Scientists also found, through analysis of DNA from the blood tests, there were specific genetic changes in the blood that indicated drug resistance. This would suggest a man was at risk of early relapse.

Professor Johann de Bono, professor of experimental cancer medicine at the ICR and consultant medical oncologist at The Royal Marsden trust, said: ‘Our study shows that a simple blood test could help us track how cancer evolves and responds to treatment – initially as part of clinical trials and eventually in routine care.

‘These so-called liquid biopsy tests are minimally invasive, cost-effective and can be performed often and with ease.

‘Tracking prostate cancer with a blood test instead of a painful surgical biopsy could significantly improve patients’ quality of life.’

Professor Paul Workman, chief executive of the ICR, said: ‘These simple blood tests detect traces of cancer circulating in the bloodstream and help us anticipate cancer’s next move.

‘They can help doctors come up with personalised treatment plans and to stay one step ahead of the disease.

‘This study showcases the value of liquid biopsies for guiding therapy. They are a faster, kinder, more flexible alternative to traditional tissue biopsies and are set to become a gold standard for cancer treatment.’

Prostate cancer is the most common cancer in men in the UK, with more than 47,500 men diagnosed every year, according to Prostate Cancer UK.

The research, conducted with The Royal Marsden NHS Foundation Trust, was presented at the American Society of Clinical Oncology (ASCO) virtual annual meeting.

WHAT IS PROSTATE CANCER?

How many people does it kill?

It means prostate cancer is behind only lung and bowel in terms of how many people it kills in Britain. In the US, the disease kills 26,000 each year.

Despite this, it receives less than half the research funding of breast cancer – while treatments for the disease are trailing at least a decade behind.

How quickly does it develop?

Prostate cancer usually develops slowly, so there may be no signs someone has it for many years, according to the NHS.

If the cancer is at an early stage and not causing symptoms, a policy of ‘watchful waiting’ or ‘active surveillance’ may be adopted.

Some patients can be cured if the disease is treated in the early stages.

But if it diagnosed at a later stage, when it has spread, then it becomes terminal and treatment revolves around relieving symptoms.

Thousands of men are put off seeking a diagnosis because of the known side effects from treatment, including erectile dysfunction.

Tests for prostate cancer are haphazard, with accurate tools only just beginning to emerge.

There is no national prostate screening programme as for years the tests have been too inaccurate.

Doctors struggle to distinguish between aggressive and less serious tumours, making it hard to decide on treatment.

Men over 50 are eligible for a ‘PSA’ blood test which gives doctors a rough idea of whether a patient is at risk.

But it is unreliable. Patients who get a positive result are usually given a biopsy which is also not foolproof.

Scientists are unsure as to what causes prostate cancer, but age, obesity and a lack of exercise are known risks.

Anyone with any concerns can speak to Prostate Cancer UK’s specialist nurses on 0800 074 8383 or visit prostatecanceruk.org