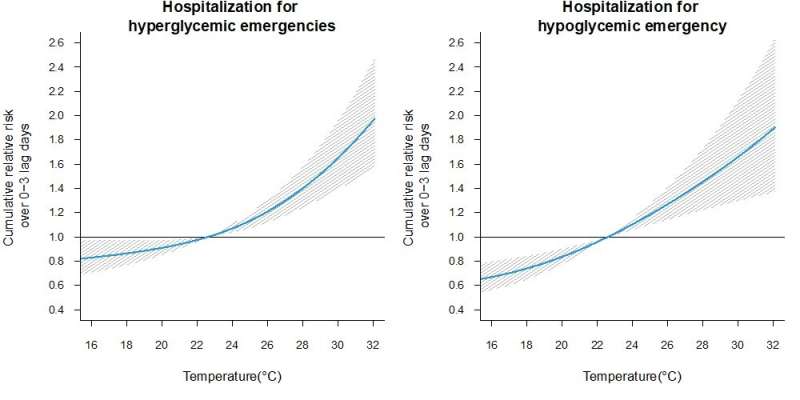 The global effects of climate change have been demonstrated to extend beyond the environment to many other areas including human health, particularly with respect to different health conditions. People with diabetes are at higher risk of requiring hospitalization during a series of unusually hot days (termed “extreme heat events”), as the body is more likely to become dehydrated and have difficulty balancing the concentration of components in the blood. Now, researchers in Japan have revealed an additional risk for people with this condition by identifying a link between extreme heat events and the likelihood of hypo- and hyperglycemia–related emergency hospitalizations.

“It is important that the physiological implications of extreme heat on individuals with metabolic disorders, such as diabetes, are well understood,” explains first author Keitaro Miyamura of Tokyo Medical and Dental University (TMDU). “This can be accomplished by examining outcomes in relation to extreme heat events and using a sophisticated model that accounts for the fact that ultimate effects may occur after heat events.”

To do this, the research team applied a distributed lag non-linear model (a model for estimating exposure-time-response function) to a dataset consisting of nationwide data for hypo- and hyperglycemia–related emergency hospital admissions from 2012–2019, as well as ambient temperature data from weather stations in each prefecture. Relative risk was determined for two levels of heat events (standard and extreme). “Relative risks for standard and extreme heat effect on emergency hospitalization for hypoglycemia were found to be 1.33 and 1.65, respectively, and similar risks were found for hyperglycemia. In most regions, the higher the temperature, the higher the relative risk,” says lead author Takeo Fujiwara.

The model, which took into account a time delay of up to three days, showed that the impacts of climate change on health may not always be obvious. These findings will contribute to providing policymakers with information about subtle or latent health effects that may need to be taken into consideration in environmental or health care policies. This is particularly important since the effects of climate change will only increase in the foreseeable future.