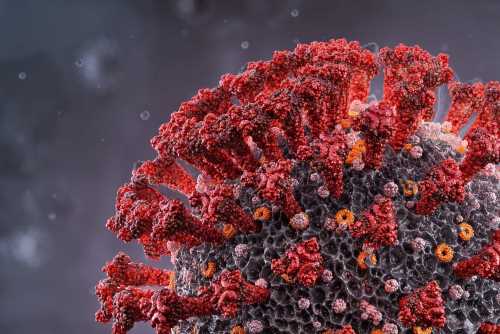 The United States Food & Drug Administration has approved memantine, an aminoadamantane drug, for the treatment of Alzheimer’s disease. Building upon their experience, researchers explored if they could target the SARS-CoV-2 envelope (E) protein viroporin channel with a molecular warhead to the angiotensin-converting enzyme 2 (ACE2) receptor. ACE2 binds SARS-CoV-2 spike (S) protein which establishes the infection, and inhibiting this reaction could yield a novel drug action mechanism to treat coronavirus disease 2019 (COVID-19).

Aminoadamantane nitrates could act as chemical probes with dual mechanisms. While the aminoadamantane moiety could block the SARS-CoV-2 E protein viroporin channel, it could also target the delivery of nitric oxide (NO)-related group to S-nitrosylate to inhibit the S and ACE2 binding reaction.

In the present study, researchers developed dual-mechanism aminoadamantane nitrate compounds for inhibiting SARS-CoV-2 entry into host cells by S-nitrosylating ACE2. Further, the researchers tested whether these compounds were non-toxic in vitro using HELA cells and in vivo using the Syrian hamster COVID-19 model.

They exposed HeLa cells stably expressing human ACE2 (HeLa-ACE2) to SNOC and assessed SNO-ACE2 formation by biotin switch assay. In other words, they studied the molecular mechanism whereby NO and its related species inhibit SARS-CoV-2 activity. Furthermore, they evaluated S and HeLa-ACE2 cell binding, for which they incubated the cells with purified recombinant SARS-CoV-S1 and S2.

The team tested the efficacy of memantine/NMT1, amantadine/NMT4, and other aminoadamantane nitrate compounds, NMT2, NMT3, and NMT5-NMT9 in a masked manner against live SARS-CoV-2 in HeLa-ACE2 cells to determine their therapeutic potential based on the selectivity index (SI). As positive controls, they used remdesivir, apilimod, and puromycin. SI compares a compound’s half-maximal non-specific cytotoxicity (CC50) in the absence of infection to its half-maximal effective antiviral concentration (EC50).

To further investigate the effect of NMT5 on SARS-CoV-2 S-ACE2 binding, the team performed co-immunoprecipitation (co-IP) experiments of these two proteins in the presence and absence of NMT5 using an anti-ACE2 antibody.

Human ACE2 contains eight cysteines (Cys) residues, of which Cys261 and Cys498 are present as free thiols. These two are likely available for S-nitrosylation via a reversible nucleophilic attack on nitroso nitrogen to form an SNO-protein adduct. Thus, the researchers also performed site-directed mutagenesis of these cysteine residues in ACE2 to validate the results of biotin switch assays. Furthermore, they performed mass spectrometry (MS) following exposure to SNOC to identify sites of S-nitrosylation.

The study findings evidenced that ACE2, the cellular receptor of SARS-CoV-2 S, could be S-nitrosylated by the NO donor and transnitrosylating agent S-nitrosocysteine (SNOC). This nitrosylation reaction appeared to inhibit SARS-CoV-2 entry, infectivity, and cytotoxicity. Site-directed mutagenesis confirmed that C261A/C498A mutation significantly inhibited SNOC-mediated S-nitrosylation on biotin switch assays, and MS confirmed the presence of S-nitrosylated ACE2 at Cys261 and Cys498.

Of the seven aminoadamantane nitrate compounds tested in the study, amantadine and memantine showed no efficacy against live SARS-CoV-2. NMT5 showed the highest protection against SARS-CoV-2, with an EC50 of 5.28 μM and SI of 9.2. Moreover, this NMT5 concentration was within the micromolar amounts attainable in human tissues at well-tolerated doses, as observed in two animal species.

The five µM of NMT5 diminished co-IP, indicating that it could inhibit the binding of S protein to ACE2 to a significant degree and that the intact Cys residue was essential for S-ACE2 binding. Either Cys mutation or S-nitrosylation could significantly decrease the interaction of S protein with ACE2.

The researchers developed a novel aminoadamantane nitrate compound, NMT5, as a chemical probe for inhibiting SARS-CoV-2 activity by protein S-nitrosylation. Its nitro group targeted ACE2 by blocking the E protein viroporin channel. These mechanistic insights would facilitate the development of aminoadamantane nitrate drugs for acute antiviral therapy for COVID-19.

Moreover, aminoadamantane nitrates for COVID-19 drug therapy could complement other drug, vaccine, and antibody therapies that depend on S protein antigenic sites. Furthermore, the binding of NMT5 to the E viroporin channel may confer the ability to block the spread of SARS-CoV-2 from one host to another.

Neha is a digital marketing professional based in Gurugram, India. She has a Master’s degree from the University of Rajasthan with a specialization in Biotechnology in 2008. She has experience in pre-clinical research as part of her research project in The Department of Toxicology at the prestigious Central Drug Research Institute (CDRI), Lucknow, India. She also holds a certification in C++ programming.