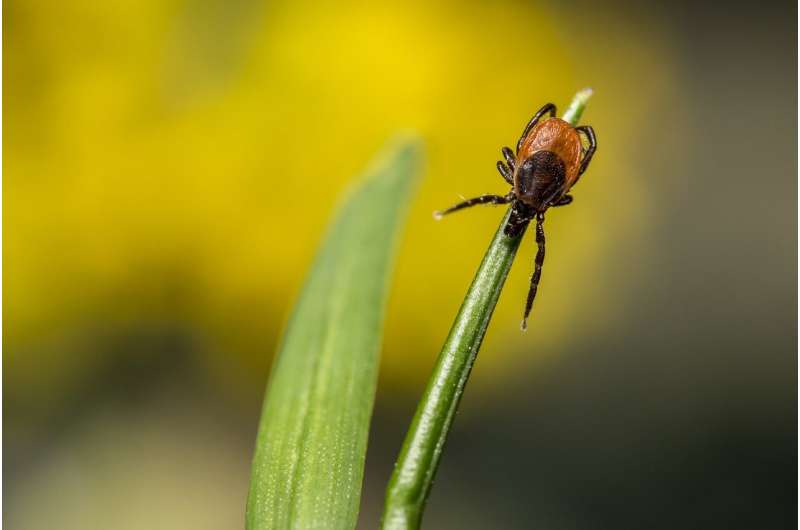 When Ram Raghavan heard from a former colleague at the Centers for Disease Control and Prevention that a 7-year-old girl had died from Rocky Mountain spotted fever as the result of a tick bite, he thought of his own daughter, also 7 years old at the time, and the potentially fatal danger posed to vulnerable populations by tick-borne diseases.

Now a professor at the University of Missouri College of Veterinary Medicine and School of Health Professions, Raghavan is an epidemiologist studying how ticks, mosquitos and other arthropods spread disease that impact people, pets and livestock over time in various geographical regions.

In a recent study, the most comprehensive of its kind in the Midwest region of the United States, Raghavan and former graduate student Ali Hroobi collected and identified various species of ticks on the outskirts of Pittsburg, Kansas, twice a month for a 3-year period. They not only found a majority of the ticks to be most active in the humid spring and summer seasons, but their comprehensive documentation of what, when and where ticks are present help public health officials better understand the threat of tick-borne diseases to humans, companion animals and livestock.

“We have seen increases recently in both the number and severity of tick-borne diseases in the Midwest, particularly in the humid climates of Missouri, Kansas, Oklahoma and Arkansas,” Raghavan said. “Since more people get infected by tick-borne diseases each year than any other vector-borne disease, it is important that we better understand what type of ticks are present in our region, where they are located and what time of year they are most prevalent. This information will help keep us, our families, pets and livestock safe.”

Raghavan explained that several factors have contributed to the rise in tick-borne diseases. Humans are increasingly relocating from densely populated urban cities to more suburban areas on the outskirts of towns near forests and grasslands where ticks are often present. Outdoor fitness activities such as hiking, biking and walking have also become more popular, especially since the COVID-19 pandemic and particularly during the warmer spring and summer seasons in the Midwest.

Climate change has played a role as well, as the warmer temperatures and humidity seem to be creating perfect conditions for ticks and the pathogens they carry to thrive. Finally, a sharp increase in population of white-tailed deer, the primary animal host for the most common tick found in the Midwest, Amblyomma Americanum, is another contributing factor.

“This comprehensive research study helps us create a baseline understanding of the current situation from a public health perspective,” Raghavan said. “These contributing factors will likely continue to play a role going forward, and now we have meaningful, relevant data to look back on for comparisons to see if certain trends continue in the future.”

Raghavan added that because there are currently no vaccines for tick-borne diseases, prevention practices and tick awareness are the best ways to avoid tick bites.

“Wearing protective clothing such as long sleeve shirts and pants when walking outdoors or on hiking trails is highly recommended, and spraying permethrin insect repellent can help as well,” Raghavan said. “Other common sense safety practices such as staying on the main trails away from vegetation and keeping dogs on leash can help protect you and your pets from ticks. Always check oneself and pets for any attached ticks after being outdoors. Also, visit with your doctor if you start to have any flu-like symptoms, as most tick-borne diseases are entirely curable, but early diagnosis is crucial.”

The research can help inform future studies to better identify when and where specific pathogens amplify within various ticks, their effects on disease severity, and the impact of climate change and land use change on the prevalence of tick-borne diseases.