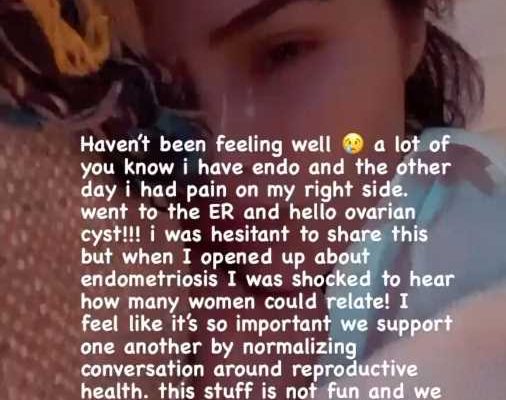 Olivia Culpo is continuing to be open about her health struggles, revealing on social media Thursday that she recently went to the ER for an ovarian cyst.

The 28-year-old Sports Illustrated model shared an update on her Instagram Story, just one month after she told fans for the first time that she has endometriosis.

“Haven’t been feeling well,” she wrote Thursday. “A lot of you know I have endo and the other day I had pain on my right side. Went to the ER and hello ovarian cyst!!! I was hesitant to share this but when I opened up about endometriosis I was shocked to hear how many women could relate!”

Culpo continued, “I feel like it’s so important we support one another by normalizing conversation around reproductive health. This stuff is not fun and we should not feel embarrassed to talk about it on top of it already being complicated at times. With that said. Does anyone have any pain remedies they recommend? Or natural remedies to make the size go down??” In August, she opened up about having endometriosis, a disorder in which the tissue similar to the tissue that typically lines the inside of a woman's uterus grows outside of the uterus, according to the Mayo Clinic. This outer tissue becomes trapped in other parts of the body, causing severe pain during menstrual periods.

“It was something that I was nervous to share because I really didn't know if people would be familiar with the condition, and it turns out a lot of women are,” Culpo told PEOPLE a few weeks later. “I was shocked to see how many women have also suffered from endometriosis, and how many questions women have about painful periods. They're not normal, and they could get in the way of your fertility.” After sharing the news of her ovarian cyst Thursday, Culpo posted several videos thanking fans for the various “tips and tricks” they offered for managing the pain. She also added that she has “cut out caffeine completely.”

“I’ve been really tired lately but that definitely has helped like I feel a little less pain,” she said, before revealing that she is planning on undergoing a laparoscopic surgery to treat her endometriosis.

“Anybody else out there that has endo, I’m going to be doing the surgery in the next two months so I'm going to try to document as much of my experience as I can to try to walk everyone through it because I am very scared and I found a lot of comfort looking at other people’s experiences,” she said. “So I will do the same, and if anyone has any tips on that, bring ‘em over.”