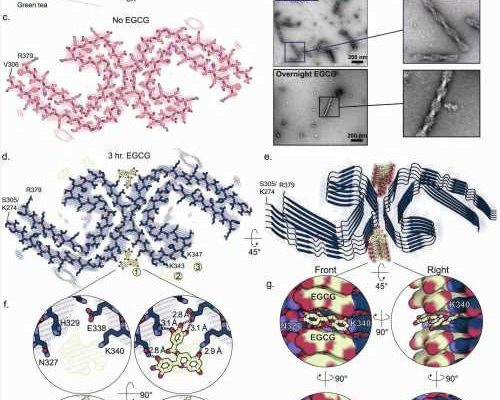 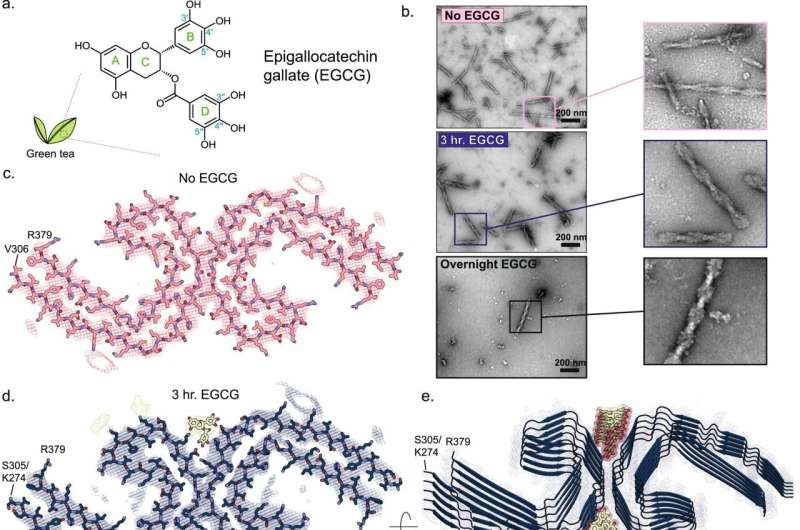 Scientists at UCLA have used a molecule found in green tea to identify additional molecules that could break up protein tangles in the brain thought to cause Alzheimer’s and similar diseases.

The green tea molecule, EGCG, is known to break up tau fibers—long, multilayered filaments that form tangles that attack neurons, causing them to die.

In a paper published in Nature Communications, UCLA biochemists describe how EGCG snaps tau fibers layer by layer. They also show how they discovered other molecules likely to work the same way that would make better potential candidates for drugs than EGCG, which can’t easily penetrate the brain. The finding opens up new possibilities for fighting Alzheimer’s, Parkinson’s and related diseases by developing drugs that target the structure of tau fibers and other amyloid fibrils.

Thousands of J-shaped layers of tau molecules bound together make up the type of amyloid fibrils known as tangles, first observed a century ago by Alois Alzheimer in the post-mortem brain of a patient with dementia. These fibers grow and spread throughout the brain, killing neurons and inducing brain atrophy. Many scientists think removing or destroying tau fibers can halt the progression of dementia.

“If we could break up these fibers we may be able to stop death of neurons,” said David Eisenberg, UCLA professor of chemistry and biochemistry whose lab led the new research. “Industry has generally failed at doing this because they mainly used large antibodies that have difficulty getting into the brain. For a couple of decades, scientists have known there’s a molecule in green tea called EGCG that can break up amyloid fibers, and that’s where our work departs from the rest.”

EGCG has been studied extensively but has never worked as a drug for Alzheimer’s because it’s ability to dismantle tau fibers works best in water, and it doesn’t enter cells or the brain easily. Also, as soon as EGCG enters the bloodstream it binds to many proteins besides tau fibers, weakening its efficacy.

To investigate the mechanisms through which EGCG breaks up tau fibers, the researchers extracted tau tangles from the brains of people who died from Alzheimer’s and incubated them for varying amounts of time with EGCG. Within three hours, half the fibers were gone and those that remained were partially degraded. After 24 hours, all the fibers had disappeared.

Fibrils in the middle stage of EGCG-induced degradation were flash frozen, and images of these frozen samples showed how EGCG snapped the fibrils into apparently harmless pieces.

“The EGCG molecules bind to each layer of the fibers, but the molecules want to be closer together. As they move together the fiber snaps,” Eisenberg said.

Kevin Murray, who was a UCLA doctoral student at the time and is now in the neurology department at Brown University, identified specific locations, called pharmacophores, on the tau fiber to which EGCG molecules attached. Then he ran computer simulations on a library of 60,000 brain and nervous system-friendly small molecules with potential to bind to the same sites. He found several hundred molecules that were 25 atoms or less in size, all with the potential to bind even better to the tau fiber pharmacophores. Experiments with the top candidate molecules identified from the computational screening identified about a half dozen that broke up the tau fibers.

“Using the super-computing resources available at UCLA, we are able to screen vast libraries of drugs virtually before any wet-lab experiments are required,” Murray said.

A few of these top compounds, most notably molecules called CNS-11 and CNS-17, also stopped the fibers from spreading from cell to cell. The authors think these molecules are candidates for drugs that could be developed to treat Alzheimer’s disease.

“For cancer and many metabolic diseases knowing the structure of the disease-causing protein has led to effective drugs that halt the disease-causing action,” Eisenberg said. “But it’s only recently that scientists learned the structures of tau tangles. We’ve now identified small molecules that break up these fibers. The bottom line is, we’ve put Alzheimer’s disease and amyloid diseases in general on same basis as cancer, namely, that structure can be used to find drugs.”

CNS-11 is not a drug yet but the authors call it a lead.

“By studying variations of this, which we are doing, we may go from this lead into something that would be a really good drug,” Eisenberg said.