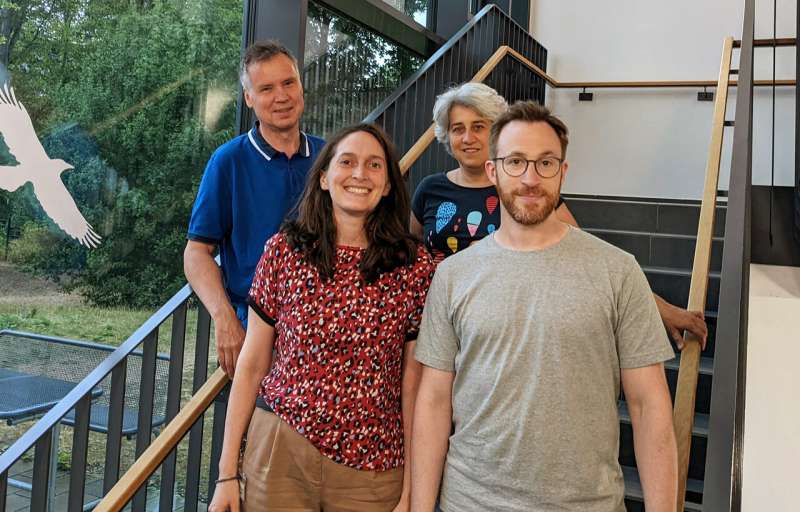 Scientists at the Institute of Neuroimmunology and Multiple Sclerosis Research at the University Medical Center Göttingen have discovered that pathogenic immune cells use the inner, soft layers of the meninges, but not the outer hard layer, to invade the nervous system and trigger destructive inflammation.

The meninges are significantly involved in the disease process of multiple sclerosis (MS). In this chronic inflammatory disease of the central nervous system, special immune cells mistakenly attack the patient’s own brain tissue. The meninges not only serve as a gateway for the self-destructive cells to enter the brain, but they are also the place where the cells trigger the self-destructive attack and continue it permanently. The role played by the different layers of the meninges in this process was previously unclear.

A team of researchers at the Institute for Neuroimmunology and Multiple Sclerosis Research at the University Medical Center Göttingen (UMG), led by Prof. Dr. Francesca Odoardi and Prof. Dr. Alexander Flügel, has now been able to show that there is a clear distribution of roles in the MS disease process among the meninges. Against expectation, almost exclusively the inner layers of the meninges adjacent to the brain are involved in the autoimmune attack on the brain. The outer, actually “immune-friendly,” hard meninges (dura), on the other hand, are practically excluded from the inflammatory process. The results were published on 30 June 2022 in the online edition of the journal Nature Neuroscience.

“These research results are significant for our understanding of how autoimmune processes are triggered, “says Prof. Dr. Francesca Odoardi, one of the senior authors of the publication. She continues: “The behavior of the disease-causing T-cells in the blood vessels of the different brain layers shows very clearly that the permeability of the blood vessel is not decisive for the attachment and migration of T-cells. The decisive factor is rather the presence of suitable adhesion molecules with which T cells can attach to the vessel wall.”

The results of the study also provide new insights into the barrier function of the central nervous system. According to this, scavenger cells of the soft meninges seem to be very effective in ensuring that brain proteins or their fragments are absorbed and “disposed of” locally. They do not enter the hard meninges and do not reach the lymph nodes via their lymphatic vessels.

“The distribution of brain proteins is thus strictly limited to the brain and the immediately adjacent meninges, at least in the healthy state. The soft meninges obviously serve as a kind of filter that limits the transmission of released brain proteins,” explains Prof. Odoardi. This makes the brain less “visible” to the immune system and thus normally better protected against autoimmune reactions.

“In the case of disease, the soft meninges and the adjacent brain tissue are then also primarily affected by the autoimmune inflammation,” adds Prof. Dr. Flügel, other senior author of the publication. “Therapeutic efforts to curb autoimmune inflammation should therefore be particularly directed at the soft meninges and brain tissue. The hard meninges and their lymphatic vessels, on the other hand, should not be considered a priority target.”

The meninges, which are made up of several layers, protect the brain from harmful influences. They provide mechanical support for the sensitive brain tissue and enable it to defend itself against pathogens. The brain tissue itself is sealed by a specialized blood-brain barrier and practically shielded from cells of the immune defense system. Pathogens can thus be intercepted and effectively combated directly at the border to the brain tissue.

Scientists at the University Medical Center Göttingen have now found answers to these questions: They discovered that in the disease process of multiple sclerosis, numerous immune cells penetrate the soft meninges. The outer hard meninges play practically no role in the inflammatory process. The scientists found out that this is mainly due to two special features of the soft meninges: the self-destructive immune cells adhere better to blood vessels in the soft meninges than to those in the hard meninges. Therefore, the cells can more easily migrate out of the blood and penetrate into the neighboring brain tissue. In addition, the disease-causing immune cells only receive the decisive signals in the soft meninges that incite them to launch the self-destructive attack on the brain.

The results of the study were unexpected. At first glance, the structure and properties of the different meninges would lead one to expect an opposite involvement of soft and hard meninges. In contrast to the soft meninges, the hard meninges (dura) can be regarded as “immune-friendly”: The blood vessels in the hard meninges have windows; they let cells and soluble components of the blood through more easily. A special vascular system, so-called lymphatic vessels, also serves as a drain. Excess tissue water and waste products can thus be drained from the tissue into adjacent lymph nodes. Specialized phagocytes control the waste products and immediately sound the alarm if a potential hazardous substance is drained into the lymph nodes. Lymphatic vessels are used by immune cells as roads to get from the tissue to their natural home, the lymph nodes. From an immunological point of view, the hard meninges could therefore function as a kind of hub for immune processes in the brain.

“Immune cells should therefore be able to migrate through the fenestrated blood vessels without any problems. Tissue water and soluble components can be drained from the lymph nodes located in the neck area and controlled there. Finally, the immune cells that have migrated into the dura can also circulate back into the lymph nodes via the lymphatic vessels after they have completed their control rounds,” states Dr. Arianna Merlini, the first author of the study.

The blood vessels of the soft brain membranes, on the other hand, are sealed by strong seals, similar to those of the brain tissue. Due to the lack of a lymphatic vascular system, there is no connection to the immune system of the lymph nodes.

Why does the described immune circuit of the dura obviously not function in autoimmune processes of the brain? The research team from Göttingen found out that special rules govern autoimmune inflammation in the brain. These are determined by the properties of the disease-causing immune cells, so-called self-reactive T cells.

“Surprisingly, these cells do not orient themselves to the permeability of the blood vessels when they leave them. Instead, they look for suitable docking sites in the vessel,” says Prof. Odoardi. Special proteins, so-called adhesion molecules, serve as “bollards” for the T-cells. They enable the T-cells to adhere and then pass out of the blood vessel. The researchers found that these adhesion molecules were found significantly more frequently in the vessels of the soft meninges than in the hard meninges.

The Göttingen researchers found another reason, though, why the self-destructive T cells avoided the hard meninges. After passing through the blood vessel, T-cells in the tissue must receive instructions from local phagocytes in order to become active. “These instructions are mediated by special antennae of the scavenger cells which present the T-cells with fragments of eaten and partially digested proteins,” says Prof. Flügel.

What does this mean for autoimmunity in the brain? The self-destructive T-cells recognize protein fragments from the brain tissue on the antennae of local scavenger cells. They are then activated, i.e. they are put into a state of excitement, secrete pro-inflammatory messenger substances and thus trigger the autoimmune inflammation. If these instructions are missing, the T-cells are not activated, no further immune cells are attracted and no inflammatory reaction develops.