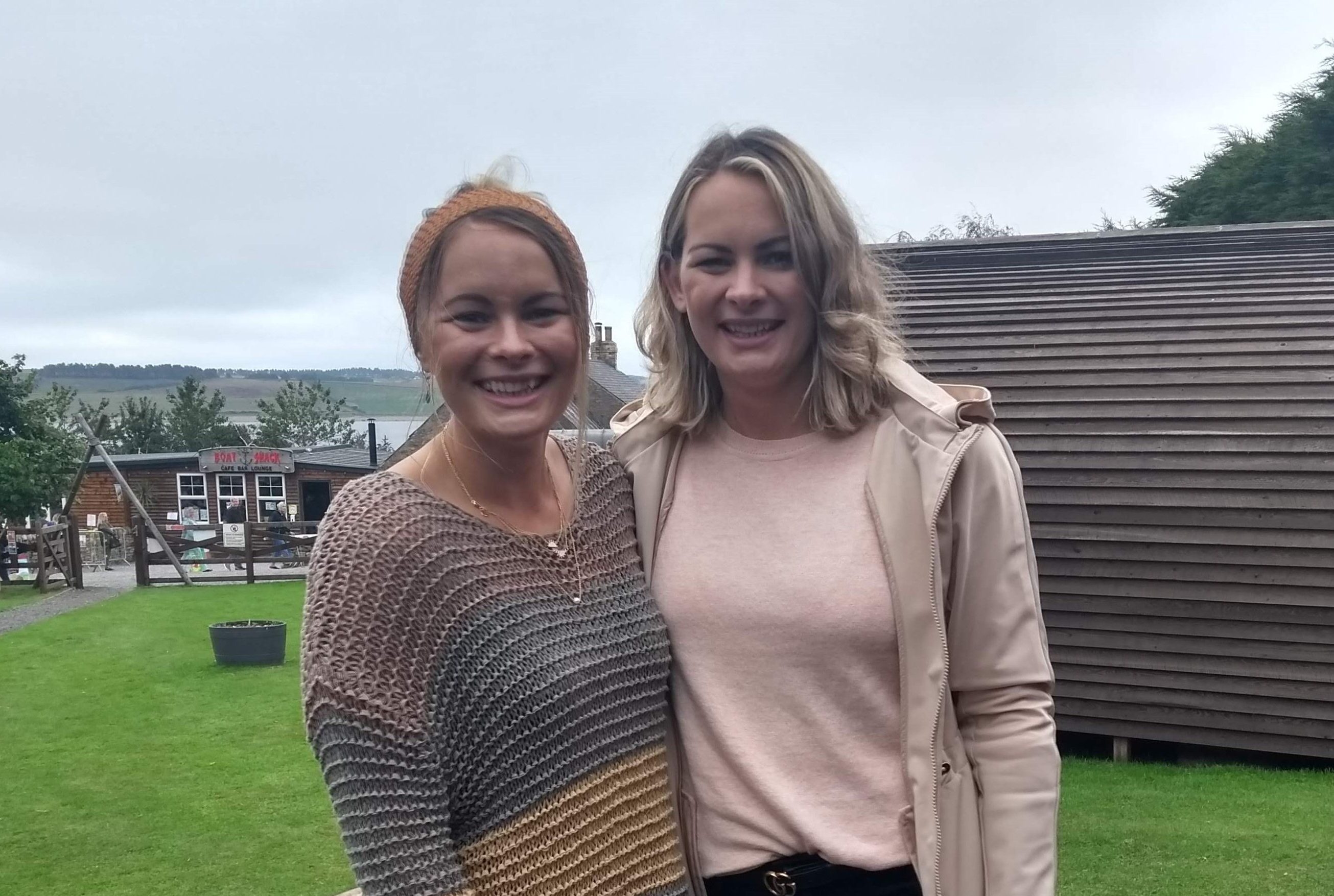 I’d been doing this regularly since my twin sister’s breast cancer diagnosis two years prior, but that morning my gut was urging me to. So I did it there and then, still half asleep.

Then, I felt it — a large, hard lump on my left breast. It was so prominent, I don’t know how I hadn’t noticed it before. I was 31 at the time.

Instantly, I felt sick with worry.

I had witnessed my identical twin sister Stella tackle Stage 2, triple-negative breast cancer after finding a lump in her right breast  – triple negative is an aggressive form of it, typically affecting younger people. I couldn’t fathom that this could be happening to me as well.

I still remember my heart breaking when Stella told me that she asked the doctor if she was going to die.

I hadn’t gone with her to that appointment as she had the lump removed and had been told that it was benign. Only, when getting her stitches checked, she was told that it was in fact cancer, and – even worse – a second lump had developed in the same breast.

The doctors acted quickly, and Stella had her breast removed two days later. She then started six rounds of chemotherapy, which she had to attend every three weeks. There are no words to describe how that made me feel – gut-wrenching fear comes close.

At the time of her diagnosis, I said that I wished it was me, as I wanted so badly to take it away from her. Honestly, though, I didn’t expect that I would ever be in the same boat as her.

After Stella’s experience, I knew I needed to get the lump checked out immediately. I was anxious but my husband Marc made sure I rang the GP. Luckily, I got an appointment that afternoon.

Stella was due to give birth to her first child three weeks later and so I put off telling her. She was two years into recovery at this point but everything was still so raw and fragile that I didn’t want to worry her.

My husband was very calm and reassuring, and was my absolute rock. He’s since admitted that he was really worried but didn’t want to show it.

The GP, on the other hand, wasn’t concerned at all. She said given my age it was very unlikely to be cancer and even with my sister’s history she still thought it was a low chance, but referred me to the breast clinic – just to make sure.

We had to wait for my follow up appointment, which consisted of an ultrasound, mammogram and biopsy, before getting any answers.

I was very anxious in the run-up to the tests. I thought about cancer every second of every day. It was hard to act normal around people at work when I so much going on, and I felt in a daze. My mind would flit from, ‘It won’t be cancer’ to ‘It’s cancer, what if it’s spread?’

Heading to the appointment, two weeks later, the sun was shining and I felt so fit and healthy.

I had convinced myself it wasn’t going to be bad news. Marc and I had even planned on getting a Chinese takeaway to celebrate that night.

I knew it was bad news when they allowed Marc to be with me in the appointment despite Covid restrictions – I was diagnosed with Stage 1 triple-negative breast cancer.

When they told me, I wasn’t actually scared but, looking back, I was in shock. It might sound strange but it was familiar to us at this point, and it was almost a relief to know what we were dealing with.

I remember hoping that I could still exercise as I’m a personal trainer, and it’s my only true passion – I don’t know who I am without that. I was determined to move as much as possible so I replaced my regular HIIT and weights sessions with walks and yoga and managed the odd run when I felt able.

My local gym also let me borrow a stationary bike so I could keep my fitness up – that really helped me.

Until Stella’s diagnosis, we had no family history of any type of cancer, which made it even more shocking – and we do not have the BCRA1 or BRCA2 genes, both markers for this type of breast cancer.

If I hadn’t watched my sister go through the same thing with such strength and determination, I think I would have been in a much darker space. As hard as it was, I knew I was going to be OK because we were both diagnosed early, and Stella was doing well.

Stella was devastated when I told her, she couldn’t believe lightning had struck twice and we both felt it was unfair. She was there for me from the very beginning – we always speak every single day but throughout my treatment, it was a few times a day, with video calls too.

Two weeks later, Stella gave birth to her beautiful daughter, which was the best motivation and a nice distraction. I got to meet my beautiful niece three days before my first chemotherapy session and straight away, she filled my heart with her smiles – although, due to the pandemic, we were only allowed to meet for walks.

The experience of chemotherapy is by far the most horrific thing I have ever been through, other than watching Stella go through it. As a PT, I’m used to feeling fit and healthy, so the days I could barely walk up the stairs were really challenging.

There were times I felt really angry and upset about the situation but I knew a positive mindset was key to getting through.

But it’s hard when chemotherapy has side effects such as mouth sores, everything aching (even my skin) and sharp stabbing pains in my chest. I am still recovering from some of these side effects today – I have collapsed veins in my arms from the strength of the drugs, and I have been told this may never return to normal.

But Stella kept me going through all of this. It’s hard to describe the relationship of identical twins but we are everything to each other. It’s a bond that can never be broken and our cancer experience is just another thing that’s brought us closer.

Unfortunately, I couldn’t have anyone at appointments with me but I spoke to Stella when I was in the hospital, and the rest of my family in our WhatsApp chat.

She gave me advice and information on what to expect – including taking my iPad, a book and a cosy blanket. The nurses laughed when I turned up with a huge bag looking like I was ready to move in.

Six weeks after chemo I had a double mastectomy. For me, it was a case of having my life rather than my boobs. I was actually more worried about losing my hair, but I’d had the cold cap during chemo treatment and managed to keep most of my long blonde locks throughout.

Surgery and chemo went very well – no further treatment was needed. I could feel it working over the course of the plan and my lump got smaller, which was very reassuring.

Next year, I’m due to get the second part of my breast reconstruction. I’m looking forward to it, so I feel properly like my old self again and not have to think so much about what tops I can wear.

We were told by doctors our case is rare. We try to not really think about it much and sometimes laugh and say, ’It just proves we are unique!’

But, in all seriousness, given no genetic links and family history, we still remain a bit of a medical mystery.

We’re on a register to be contacted every two years when new advancements in gene testing become available so hopefully we can get to the bottom of the cause for future generations of our family.

Cancer has changed my perspective on life. The little things I used to get so worked up about just don’t matter. You realise how precious and fragile life is and it’s a punch in the face reminder to just go for what you want.

I now work part-time and want to spend as much time as possible with the people I love and have more ‘me time’.

As a way to stay motivated and help others in a similar situation, I decided to set up an Instagram page @shemoves_uk which documented how exercise helped me through treatment, mentally and physically.

Luckily, now, Stella’s three years into recovery and I’m one year in remission. But my advice for other people is: don’t ever hesitate to get something checked out, even if you think it’s nothing to worry about. It’s so important to go to your doctor – it could be the most vital thing you ever do.

CoppaFeel! are the first breast cancer charity in the UK to solely raise awareness among young people. The charity aims to ensure breast cancers are diagnosed early and correctly by educating people on the signs and symptoms, encouraging them to check regularly and empowering them to speak with their doctor. To find out more click here.