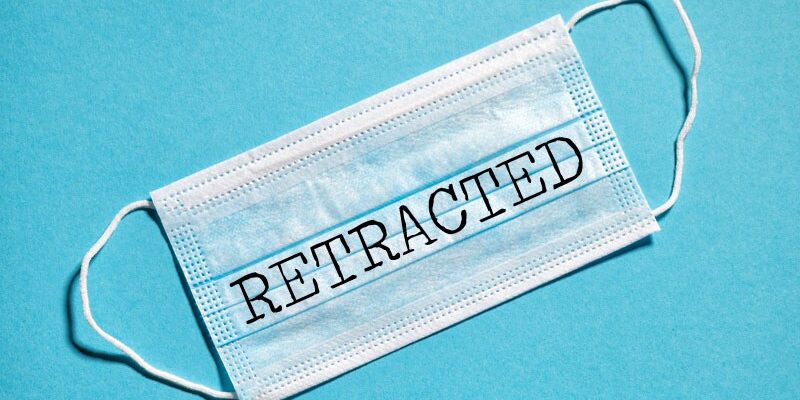 A study that warned of the perils of using face masks as a precaution against contracting Covid-19 appears slated for retraction, Retraction Watch has learned.

The 2020 paper, “Facemasks in the COVID-19 era: A health hypothesis,” was written by Baruch Vainshelboim, who listed his affiliation as Stanford University and the VA Palo Alto Health System. But the study gained wide circulation earlier this month, thanks in part to some conservative politicians, and became the subject of fact-checks by the Associated Press and Snopes, which pointed out that

The paper was published by an exercise physiologist with no academic connection to Stanford University or the NIH in a journal that accepts “radical, speculative and non-mainstream scientific ideas.”

Among the claims in the article are that:

The existing scientific evidences challenge the safety and efficacy of wearing facemask as preventive intervention for COVID-19. The data suggest that both medical and non-medical facemasks are ineffective to block human-to-human transmission of viral and infectious disease such SARS-CoV-2 and COVID-19, supporting against the usage of facemasks.

Wearing facemasks has been demonstrated to have substantial adverse physiological and psychological effects. These include hypoxia, hypercapnia, shortness of breath, increased acidity and toxicity, activation of fear and stress response, rise in stress hormones, immunosuppression, fatigue, headaches, decline in cognitive performance, predisposition for viral and infectious illnesses, chronic stress, anxiety and depression.

But Stanford disavowed Vainshelboim and his article in a statement:

Stanford Medicine strongly supports the use of face masks to control the spread of COVID-19.

A study on the efficacy of face masks against COVID-19 published in the November 2020 issue of the journal Medical Hypotheses is not a “Stanford study.” The author’s affiliation is inaccurately attributed to Stanford, and we have requested a correction. The author, Baruch Vainshelboim, had no affiliation with the VA Palo Alto Health System or Stanford at the time of publication and has not had any affiliation since 2016, when his one-year term as a visiting scholar on matters unrelated to this paper ended.

A post on The Gateway Pundit which identified the study as related to Stanford has been updated.

Stanford isn’t the only bogus credential Vainshelboim has used as an author. He often lists an affiliation with Rabin Medical Center, in Israel. However, according to an email we have seen from a faculty member at the institution, Vainshelboim has not been on staff there for at least eight years and never held a professorship, as he has claimed in biographies.

Vainshelboim’s arrival at Saint Francis was profiled in this brief 2017 news article, which noted that he had:

Those details don’t seem to jibe with what’s on Vainshelboim’s LinkedIn page, which says he received a PhD in exercise physiology from the University of Porto in 2014 and a master’s degree from Wingate in 2008.

Vainshelboim did not respond to a request for comment.

We reached out to Steve Shafer, former editor-in-chief of Anesthesia & Analgesia, and a member of our parent nonprofit’s board of directors, who said: